Katelyn Amstutz, a junior biology major from Dalton, Ohio, spent several weeks this summer analyzing viruses found on Ohio poultry farms and the vaccines that prevent them. The experience was part of a research internship at the Ohio Agriculture and Research Development Center (OARDC), the agricultural research branch of The Ohio State University.

“Getting to look at things like RNA and DNA is cool because it’s what makes up all of the stuff that makes anything biological work,” said Amstutz, as her research provided her the opportunity to explore her interest in the smaller components of biology.

“I was looking to see how the virus was mutating compared to the vaccine viruses that we use,” said Amstutz.

Most of the research involved genetic analysis on the type of IBD which is specific to Ohio. “Ohio is apparently this little island where this virus doesn’t really look like any of the other IBD viruses throughout the rest of the world,” said Amstutz.

Working in the lab, Amstutz spent a month taking samples from more than 40 bursas and extracted the virus RNA. She looked for major difference between the vaccine and the disease that could prevent the antibodies from recognizing the new mutations in the virus.

“The problem is that the vaccine viruses that are used commonly, look a lot different than the viruses that you find in Ohio,” said Amstutz.

By identifying changes in the virus, the vaccine can be customized to better suit each individual case and ensures new strains of the virus are documented.

“My mentor has a company that makes custom vaccines,” said Amstutz. “The farms I was doing the sequences for were having problems with the disease recently despite having vaccinated before.” Amstutz’s research could later be applied to the crafting of vaccines that could aid this particular farm.

The program offered Amstutz the ability to work close to home and also explore the possibilities of working in the lab in a rich, scientific environment. “Knowledge-wise I learned a lot, and also I learned that I really enjoy doing lab stuff,” she said.

Returning to Bluffton, Amstutz finds herself using her summer research in her biology labs, which also helps her to think more critically of the work she’s doing in the classroom setting.

Looking toward her future, Amstutz hopes to continue working in the research field and plans to attend graduate school. 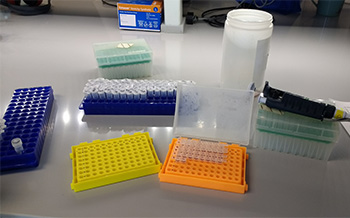 “Getting to look at things like RNA and DNA is cool because it’s what makes up all of the stuff that makes anything biological work.”