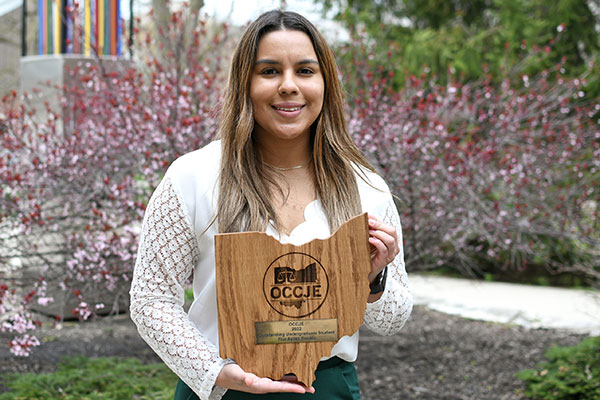 Flor Avilez Escoto '22 was honored by the Ohio Council of Criminal Justice Education.

Flor Avilez Escoto ’22, a criminal justice major from Santa Lucia, Honduras, was recently named Outstanding Undergraduate Student by the Ohio Council of Criminal Justice Education. She was awarded the honor at the OCCJE annual conference, held this year on Bluffton University’s campus.

“I feel honored right now for all of the opportunities Bluffton has given me. I feel if I wouldn’t have come here, I wouldn’t have experienced all these great things,” said Avilez Escoto. “I’m really happy and excited to see what my future has for me.”

Drawn to the field at a young age, Avilez Escoto says she’s “just passionate about justice.”

“I was used to the process here, so it was really cool to learn about the differences back home,” said Avilez Escoto. “The biggest difference is that in my home country, there is a lot of potential, but we lack resources.”

During the spring 2022 semester, she interned at Allen County (Ohio) Juvenile Court. The internship confirmed her career path.

“I’m in the juvenile detention and community control area,” said Avilez Escoto. “I want to focus on working with juveniles and just try to help them.”

Outside of classes, Avilez Escoto is a former soccer and swim student-athlete. She is also a member of International Connection (ICon), works as a resident advisor and serves as the president of Multicultural Student Organization (MSO).

The experiences, especially MSO, have helped her overcome her nerves.

“I used to be really shy, and I had a hard time with public speaking,” said Avilez Escoto. “It’s been great. I feel like I’ve been able to build a lot of connections.”
Avilez Escoto is considering graduate school in the future, but for now she wants to begin her career. She already has a job offer and credits her professors with supporting her.

“If they push you to the water, you’ll be able to swim,” said Avilez Escoto. “They know I can do challenging things, and they’re always reminding me of that and encouraging me.”

With a focus on restorative justice

At Bluffton, every criminal justice class includes a restorative perspective. This means solving problems at the earliest point. And depending on the situation, using the justice system as a last resort.