Student of the year 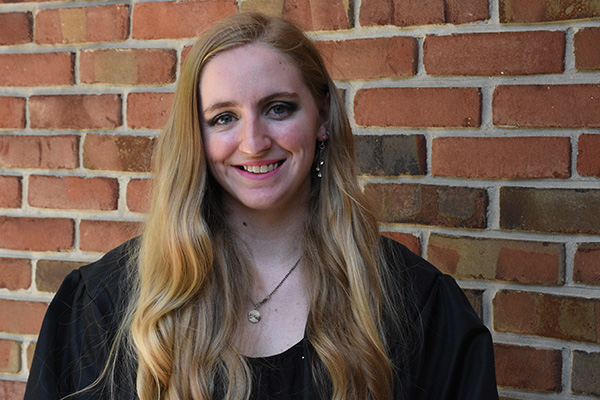 Nominated by Michael Barrett, assistant professor of criminal justice, Moon said she was “not expecting the extra recognition.”

However, she has put in the extra work. Moon spent January through April of this year at Soteria House, a domestic violence shelter in Logan County, Ohio, working directly with abuse victims during her field experience.

“I think it was helpful having both majors because with domestic violence criminal justice meets social work daily,” explained Moon, of Bellefontaine, Ohio. “I had a better understanding of how the two areas work together and collaborate.”

Moon came to Bluffton as a first generation college student unsure of what she wanted to study, but she was intrigued by the idea of criminal justice. After a year on campus, she added social work at the urging of Dr. Walt Paquin, director of social work.

“I’ve just always been someone who’s wanted to be there for people,” she explained. “It’s always been a part of me.”

At Soteria House, she saw first-hand how social service agencies can, “take someone in and help them get back on their feet so they can move on with the next step of their lives.”

While she sat in on some counseling sessions and shadowed case managers, Moon most enjoyed working with the legal advocate, who worked closely with domestic violence victims to obtain civil protection orders or who are going through the court proceedings.

“Going to court was so interesting. I learned a lot of things about the legal system and how it works,” explained Moon. “It was an eye opening experience.”

“Despite graduating, I know I can come back and talk to my professors anytime,” said Moon.

Social science professors encourage students to ask the tough questions and then figure out a way to apply it to a job they're interested in.