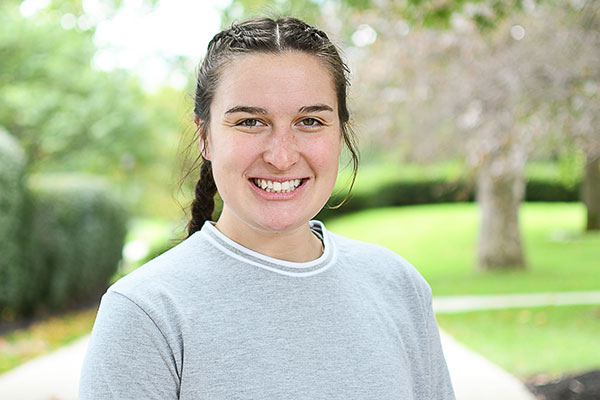 Working with the Maumee Valley Habitat for Humanity introduced Ella Zaborowski to an unexpected passion.

Through an internship, Bluffton University student Ella Zaborowski ’23, found a new interest in nonprofit work. The marketing major from Toledo, Ohio, worked for the Maumee Valley Habitat for Humanity organization over the summer.

“Their main purpose is that every person should have a decent place to live,” said Zaborowski. “Our goal for the season was to have three houses being built at one time.”

Zaborowski originally applied for the social media internship after a relative recommended the position to her, but instead, she was placed in a position as a volunteer coordinator intern.

“I learned that it’s okay to receive a ‘no’ when sending out applications,” said Zaborowski. “This will naturally happen in any position. You just have to be okay with it, bounce back and find a ‘yes.’”

Zaborowski’s position included recruiting new volunteers. She would then organize tasks and work with the volunteers who help build houses for those in need.

“We would purchase the land and the materials, pay all the contractors and do everything that is needed to be done,” said Zaborowski. “The only thing the new owners have to pay is an affordable mortgage.”

New homeowners also receive 100 hours of training to develop skills such as lawncare and basic maintenance. They also provide 200 “sweat equity” hours volunteering with other Habitat houses being built.

Over the summer, Zaborowski even jump started a program called Rock the Block for the organization. Zaborowski recruited 64 volunteers to work in a low poverty neighborhood. For this program, the volunteers completed landscaping and home repair projects for 13 different houses.

“They [nonprofit organizations] are so important,” said Zaborowski. “It’s basically just being God’s hands and feet on this Earth. I just think it’s super cool, and I never expected to have a passion for something like this.”

On campus, Zaborowski is the secretary for Student Senate. While her previously plans for the future included a career in health care marketing, Zaborowski can now imagine herself pursuing a career in the nonprofit world.

Many marketing students choose to supplement coursework through volunteerism, internships and practicums.