Senior spends summer preparing for a career in speech-language pathology

“With this experience I got to see the good and the bad of a career in speech-language pathology. I got to see the hard parts along with the happy parts, and I took away the importance of speech pathology and the positive impact it can have on people’s lives,” said Eickholt.

During the experience, Eickholt observed children and adults with different disorders and delays receiving therapy and observed various evaluations. Speech-language pathologists work with people of all ages who have communication disorders, voice disorders, cognitive disorders and swallowing difficulties. Though she mainly watched what was going on, there were times when she was able to play games with the children during their interaction with the therapist.

The experience helped Eickholt gain more than 25 hours of observation which will enhance her application to graduate school in speech pathology education, and will contribute to her clinical hours required before she becomes licensed. It’s a career path she found midway through college. Originally an education major, Eickholt discovered it wasn’t the best fit.

“I realized I worked better one-on-one with people than I did working with an entire classroom. I think my academic advisor at the time suggested it to me, and I ended up in the introduction to speech-language pathology and audiology class and absolutely loved it. I knew it was right for me when I was excited to study,” explained Eickholt.

A combination of this realization and her time volunteering at Lima Memorial helped her recognize that she is more than ready to pursue this passion as a career.

“I’ve known and worked personally with a little girl who has Down syndrome; she’s the reason why I was inspired to work with people with disabilities, and other kinds of special needs.”

Experiences like the one Eickholt completed over the summer prepares students to apply for graduate school and strengthens their applications.

“I understand more about the career, the way things work in a hospital setting and what will be expected of me in this future career,” said Eickholt. “There will be a lot of studying, but it will all be worth it." 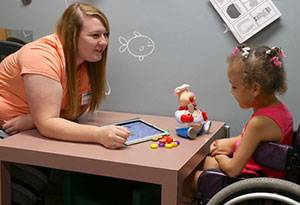 “I realized I worked better one-on-one with people than I did working with an entire classroom. I ended up in the introduction to speech-language pathology and audiology class and absolutely loved it. I knew it was right for me when I was excited to study.”