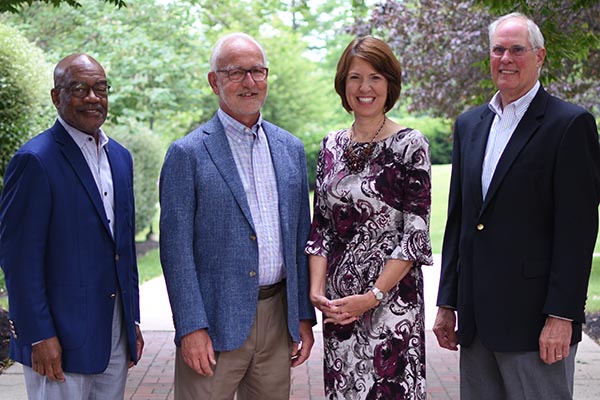 Board of Trustees spring 2021 meeting

The Bluffton University Board of Trustees met in June for their annual spring meeting. The board reappointed Dr. Jane Wood as president; reviewed plans for the Austin E. Knowlton Science Center; and completed diversity, equity and inclusion training.

Trustees also took several actions including establishing DEI as a standing committee on the board, promoting faculty members and recognizing changes on the board and within the university.

Board members completed a presidential review process and reappointed President Wood for a five-year term. The board noted her areas of strength as mission and planning, administrative management, budget and finance, enrollment management, student life and representing the institution. President Wood came to Bluffton in summer 2018

Bluffton will conclude its five-year Simply Innovate Campaign on June 30, 2021. The board reviewed revised plans for the campaign’s signature focus, the Knowlton Science Center, and President Jane Wood discussed a fall groundbreaking. The new building, to be located in the heart of campus, will be home to the teaching labs for nutrition and dietetics, chemistry and biology. It’s expected to be open in time for the 2023 academic year.

Members of the board completed the Building Cultural Competencies within Organizations training program through Tiffin University. Five Bluffton employees completed the training earlier this year, and they will be rolling it out to the rest of Bluffton’s faculty/staff starting this fall. The program is designed to help individuals work more effectively with people who are different from themselves and strengthen their awareness and understanding about diversity and inclusion through the lens of cultural intelligence.

“Strengthening diversity, equity and inclusion is central to the vision of Bluffton’s We Flourish five-year strategic plan. We want all members of our campus community trained in cultural competency and that starts from the top down,” said President Wood. “I’m excited to continue moving these efforts forward and am pleased the ad hoc committee formed last year to focus on DEI efforts is now a standing committee.”

Retiring after the maximum 20 years of service on the board were Lawrence E. Milan ’73 and James T. Sommer ’68.

Milan, senior vice president, chief human resources and diversity officer at Connecticut Children’s Medical Center, served as an at-large appointee of the board. Since 2004, he was a member of the Enrollment Management/Student Life committee and had been chair of the Student Life committee for 16 years. He also chaired the ad hoc Diversity, Equity, and Inclusion committee, which formed in 2020, and previously served on the Academic Affairs committee. Milan’s expertise in the field of human resources was instrumental in guiding Bluffton’s mission and raising the level of board member effectiveness.

Before his retirement in 2013, Sommer was CEO of Communities of Maple Lawn in Eureka, Ill., and was previously president of Sommer Brothers Seed Company in Pekin, Ill. An at-large member, Sommer had served as the board’s secretary since 2017. He brought significant expertise to the Advancement committee, of which he served for 19 years. He previously served on the Strategic Planning/Board Development and Planning committee and Academic Affairs committee. Sommer was also a volunteer on the Health and Fitness Education Center campaign of which his family’s stewardship and generosity led to its Sommer Center naming. He was also instrumental in the renovation of the Business Office suite and Alumni Field project.

The board also acknowledged Dr. Hans Houshower’s 24 years of service to Bluffton. Joining the staff in 1997 as a grant writer, he was the third generation of his family to work at Bluffton University. He also served as director of technology, vice president for academic advancement and learning technologies, and for 14 years, vice president for advancement.

Azra Nakicevic ’98, a CPA at GBQ Partners in Columbus, Ohio, will join the board at the fall meeting.