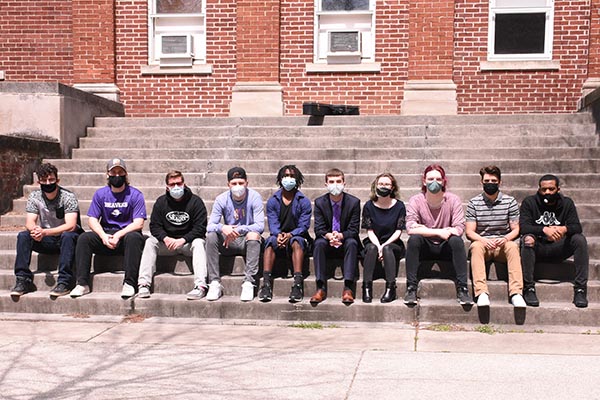 With 13 tracks from 13 student composers, Bluffton University students were treated to a range of musical styles during an end-of-year album release party hosted by Bluffton’s Office of Student Involvement. The event marked the completion of Bluffton’s first Digital Music class.

“We are really excited about this album,” said Dr. Crystal Sellers Battle, chair of the music department. “There’s a song for everybody on it.”

Of the 13 students, just three were music majors. The rest took the class as an elective or to meet their general education requirements. Their major assignment: create eight bars of original music and develop a song using the music production software Logic Pro. Students were given the freedom to choose their own style resulting in an eclectic mix of hip hop, pop, country, blues and electronic dance music on the album. There is even an action and adventure movie score.

“Each student composed their own song from scratch,” explained Kendall Nesbitt, adjunct professor and Grammy-nominated producer. “The writing, production, mixing, arranging and performance were all done in a digital environment. This class teaches you how to be a composer with just you and your computer.”

Nesbitt taught remotely from his home-base in Chicago with Sellers Battle providing assistance in the new digital music classroom. The classroom is open to all majors and students have access to a variety of digital music software.

The class allowed Julian La Vallee ’21, a music major from Jefferson, Ohio, to expand on skills he developed during a 2019 semester in Nashville, Tenn. For his contribution, La Valle worked on a song called “Victory Lap.”

“It’s a celebration piece for my last trip around campus. I’ve worked with these tools before, but it’s nice to ask Kendall some more intricate questions so I can utilize Logic better,” said La Valle. “This class also shows different majors what can be done with music. So many people are interested in creating music but don’t know how to start.”

Michael Peacock ’24, a criminal justice major from Fort Worth, Texas, enjoyed how the class allowed him to show off his talent.

“I’m into music but I had only ever sung before. This class challenged me and got me out of my comfort zone,” said Peacock, who made an EDM song and plans to continue music as a hobby. “It was a really fun class.”

Student compositions were compiled into an album titled “B-Verb,” a play on the words Beaver and the music term reverb. Sellers Battle is excited for the success of the first class and is looking forward to more students learning about digital music in the future.

“There were some unlikely friendships developed during this class,” explained Sellers Battle. “Students from different majors and different backgrounds worked together and collaborated to make some really great music.”