Tennefoss’ speech, “Turning Profit Into Peace: The Shalom of Small Business,” celebrates the way small-town entrepreneurship builds peace and well-being in a local economy as well as globally.

She earned $300 and will compete against winning students from other North American Mennonite colleges during the bi-national competition.

Claire Myree ’21, an English and communication double major from West Chester, Ohio, came in second with the speech, “Making Peace with Our World through Reduction.”

Jenny Dorsey ’21, a Bible and theology major, came in third with the speech, “We Need Not Make Another Other: How the Church’s Practice of Exclusion Violates Jesus’ Call to Peace.”

Gabriel Denecker ’21, who won last year’s contest, also gave a speech titled “Privilege and Greed: Global Inequalities and the Things that Keep Us from Peace.”

The second and third prize speech winners were awarded $200 and $100 respectively.

This contest is administered by the communication and theatre department at Bluffton University. Dr. Gerald Mast, professor of communication, has taken the lead for 25 years.

Winners of the peace oratorical contest at Bluffton University have frequently won prizes at the intercollegiate level. 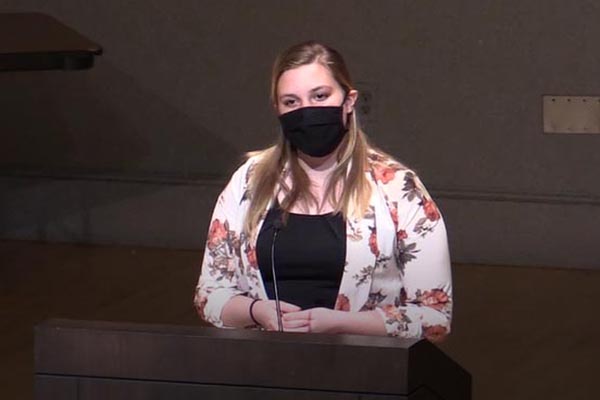