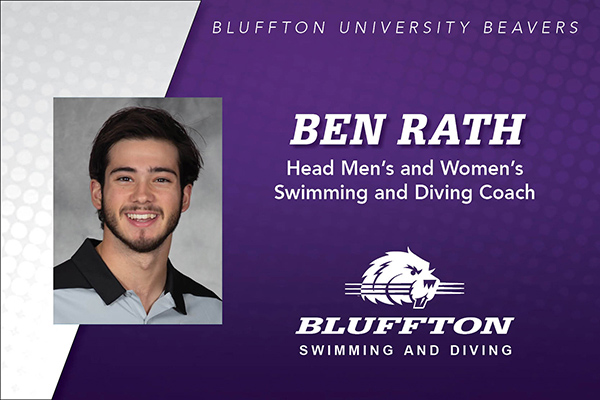 Bluffton University has selected Ben Rath as its head men’s and women’s swimming and diving coach, an intercollegiate program to start in the 2021-22 academic year.

Rath graduated from the University of Findlay in December 2018 with a bachelor’s in Sports Business Analysis. He also served as the team captain on Findlay’s men’s swimming and diving team for two years and was named the 2018 Great Midwest Athletic Conference Male Athlete of the Year and the 2018 GMAC/MEC Male Swimmer of the Meet.

“My previous experiences as a student-athlete and coach have prepared me to develop a strong team culture, recruit and retain student-athletes and establish a sturdy foundation which will allow Bluffton’s program to become recognizable amongst its peers and surrounding communities,” said Rath. “I look forward to building relationships with and recruiting student-athletes who embody Bluffton’s enduring values, and I want to especially thank Bluffton’s vice president of student affairs and athletics, Phill Talavinia, for the opportunity to do so.”

Rath most recently served as the assistant swimming and diving coach at the University of Findlay, where he was integral in the recruitment process, helped coach the team to establish 12 new school records, as well as lead eight team members to All-American Honors and 10 to become NCAA qualifiers.

He has also held positions as Lakeview Country Club summer swim team head coach and the lead senior coach at Findlay Area Swim Team (FAST). He will start at Bluffton University on March 24, 2021.

The Beavers are an NCAA DIII school and compete as part of the Heartland Collegiate Athletic Conference. With Bluffton’s addition of men’s and women’s swimming and diving, seven schools in the HCAC will offer the sport.

Bluffton University will partner with the Lima YMCA as the team’s practice and host site. Bluffton now has 18 intercollegiate athletic teams including men’s and women’s basketball, golf, soccer, cross country, indoor track and field, and outdoor track and field. Bluffton also offers football and baseball for men and softball and volleyball for women.