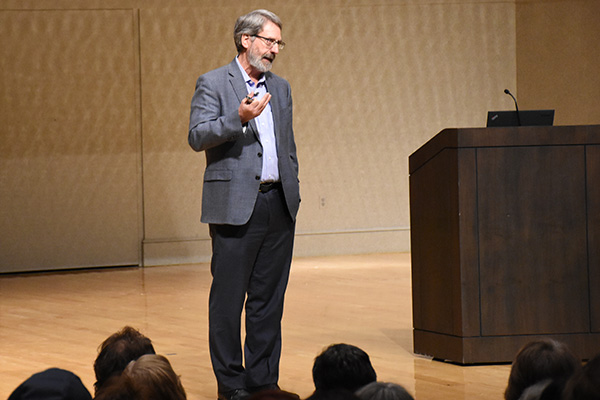 During Bluffton University’s annual Keeney Peace Lecture, John Sharp shared “Changing the World One Life at a Time: The MJ Sharp Story.” The lecture took place on March 26, just days from the two year anniversary of the confirmation of MJ’s murder in the Democratic Republic of the Congo. While the details of MJ’s death continue to be a mystery, Sharp shared the details of MJ’s life that left a tangible impression on the world.

“Who was MJ,” questioned Sharp. “He was like you. Don’t think you can’t do what he did.”

According to Sharp, what MJ did exceptionally well was reconciliation.

From working with soldiers considering conscientious objection with the Military Counseling Network in Germany to building relationships with warlords and militia leaders in the DRC, MJ had the ability to spark change by listening and learning.

“He demonstrated how we can become friends with and care for people who disagree with us,” said Sharp. “The idea that we must agree in order to be friends or engage each other is shortsighted.”

The message aligned perfectly with Bluffton’s 2018-19 Civic Engagement Theme: “When Talking is Tough: Respectful Conversations in a Divided Nation.” Throughout the year, Bluffton’s students, faculty and staff are drawing on the theme to put into practice ways to better communicate with and learn from each other.

Sharp said MJ never boasted about the accomplishments of his relationship-building work, but after his death, NPR reported a story on MJ’s life and Sharp learned that over time MJ and his team had convinced 1,600 rebels to leave the jungle while sitting and sharing under the shade of a banana tree.

“He knew you can’t always tell who the bad guys and good guys are,” said Sharp. “MJ understood that binary is not a healthy way to view the world. Everybody has the capacity to do both good and evil.”

Sharp also shared the story of one life changed by MJ’s actions. By text, MJ wrote his mother Michelle about convincing the parents of a young girl to not marry her off because Mennonite Central Committee had money for her education.” The Sharps recently learned she is about to graduate from high school at the top of her class.

He also shared details on the investigation into MJ’s death. What Sharp knows is that U.N. investigators, like MJ had previously not been harmed in the DRC, that analysis of a video released by the DRC government to exempt their involvement instead appears to implicate them and that a colonel in the army has been indicted in the kidnapping and murder plot. However, the motive remains unclear.

But in the DRC where MJ and his coworker Zaida Catalan’s blood was spilled, Sharp said, “Things are changing. Everybody knows Michael and Zaida’s story.”

Just two weeks prior to coming to Bluffton, Sharp led a climb to the top of Mount Kilimanjaro. The trek raised money for an endowed scholarship in MJ’s name for graduate students of Eastern Mennonite University’s Center for Justice and Peacebuilding. Video from the climb, which was on MJ’s bucket list, shows John spreading MJ’s ashes at the Peak of Africa with climbers sharing the words, “Wherever these ashes go… may they bring peace.”

Sharp ended the presentation with an invitation to Bluffton students to also spread peace.

“I tell you the story of MJ’s life to invite you to become a reconciler,” said Sharp. “You don’t need to be called. You don’t have to go to Africa. Engage wherever you are in life.” 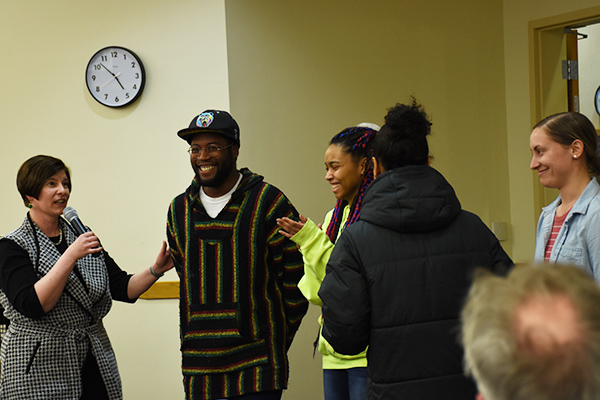