Of Bronze and Bravery 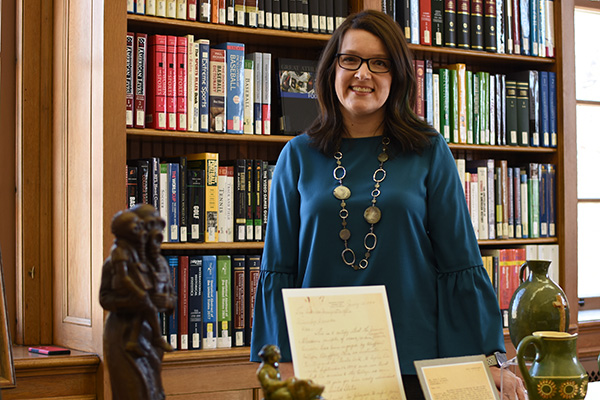 Archivist Carrie Phillips curated the "Of Bronze and Bravery" exhibit

Through artwork, letters and scrapbooks, Bluffton University archivist and 1999 graduate Carrie Phillips is sharing the unique history of Bluffton during and after World War I. Phillips developed the exhibit “Of Bronze and Bravery” as a complement to “Voices of Conscience,” the traveling Kauffman Museum exhibit on display at Bluffton’s Musselman Library. The two exhibits highlight the differing experiences of Mennonites during the Great War Era.

“Of Bronze and Bravery” brings the story told by the Kauffman Museum exhibit closer to home by illustrating what “conscience” may have meant to Bluffton students, faculty, staff and administration during the war.

“The Great War seemed far away from Bluffton until the draft began in May 1917,” explained Phillips. “Some of our students and faculty, both Mennonite and non-Mennonite, were drafted.  Others chose to enlist before being drafted, to have some control over their future. The college, under President Samuel Mosiman’s leadership, supported these men, and the war effort, in interesting and unexpected ways.”

In “Dancing with the Kobzar,” Bluffton’s centennial history written by Dr. Perry Bush, professor of history, President Mosiman is described as being proud that “by May 1917, at least, no Bluffton College man, Mennonite or not, had enlisted for regular combatant service.”

However, the book continues, “Mosiman threw himself and the college he led behind the war in every way short of contributing to actual combat.”

Mosiman is featured in many of the letters on display in the “Of Bronze and Bravery” exhibit.

“The students in wartime service frequently wrote letters back to campus, and President Mosiman would reply,” explained Phillips. “He also wrote letters on their behalf to draft boards and even the Secretary of War concerning noncombatant service. These letters are first-hand accounts of what was going on at that time and are fascinating to read.”

The “Of Bronze and Bravery” exhibit is broken into two main elements—the “Bravery” portion explores the experience of Bluffton students during wartime and features articles from Bluffton’s student newspaper “The Witmarsum,” photographs and yearbooks.

“One of the most unique pieces is a scrapbook which belonged to Mosiman’s niece, Ruth Ringelman, who graduated in 1919,” said Phillips. “It captures her experience as a student at Bluffton during wartime and features pictures of fellow students who were off at camp and the celebrations in town on Armistice Day.”

The “Bronze” portion features selected works of artist John Peter Klassen—a refugee of the Russian Revolution who escaped to Canada and came to Bluffton after President Mosiman recruited him to further develop the art program on campus. While Klassen came to Bluffton after the war in 1924, his work and teaching focused on his commitment to peace. Many works by Klassen are featured on campus including the Klassen Court display of bronze plaques and sculptures that reflect on human suffering and the impact of war.

The exhibit includes pieces such as “Modern Madonna,” a take on Raphael’s Sistine Madonna, with the faces of a mother and her child covered by large gas masks, and a bronze plaque of Ukrainian anarchist Nestor Makhno.

“Klassen’s art was inspired by his life experiences. Visitors will see works that were products of the wartime turmoil he witnessed in Russia as well as the teaching legacy he established in Bluffton,” said Phillips.

Both the “Voices of Conscience” and “Of Bronze and Bravery” exhibits will be on display at Bluffton University through March 31. For more information about the exhibits and related presentations, visit www.bluffton.edu/voices. All exhibits and presentations are free and open the public. 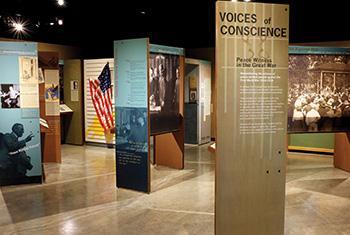 Remembering the witness of peace-minded people against the First World War from 1914-18.