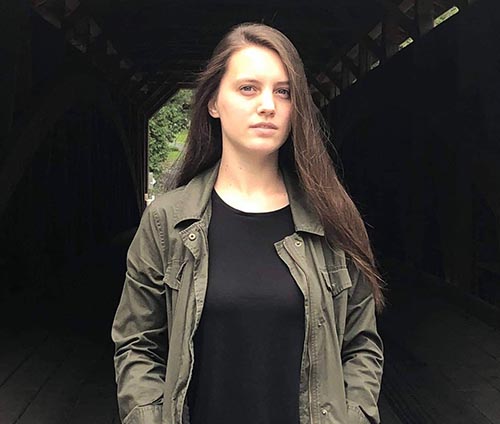 Morgan MacVaugh is a conductor of magic. She’s currently rooted in Lancaster, PA where she lives for card games, oil paints, and her  black cat. In the coming years, she'd like to attend graduate school for creative writing and go gallivanting through Scotland. Her work has appeared in Hunger Mountain, F(r)iction’s Dually Noted Series, and Luna Station Quarterly.

I drive past a dead president’s house on the way to work every morning. It doesn’t matter which one it is—er, was. I don’t think so, anyway. The point is that it’s hidden on that street, where the ritzy folk of Lancaster insist on calling their homes “quaint” and “colonial” when really each lot holds a stone mansion posing as a countryside cottage with turrets and columns and all of that riff. The president’s house is tucked away neat behind a long lawn checkered with oak trees and moss, looking sleepy and dated behind its dark green shutters. It’s morning when I pass, so the light’s shining in from the back; I catch a ripple of sunlight fracturing through the crystal chandelier.

My job’s at the flower shop on the next street over. It sits in the old Trauermacher factory, beside some fancy salon-massage place for those rich old bats who wear white pants in the summer paired with coral blouses, and a bridal shop with café seating outside.

I make ten dollars an hour here, but that’s okay.

It’s okay, I say to myself when I’m putting on a lily stamen-stained apron in the morning; when I’m answering each cry of the phone; when I’m placating walk-in brides wanting quotes for color schemes; and when I’m tucking tail cause the boss is on the rampage. It’s okay because I have a car payment to pay off before my student loans start, and because I graduated with a creative writing degree. There’s no one paying any better. I was told romantically, a long time ago, that to be a storyteller, you have to do things you don’t want to do. Mainly to support being a storyteller. Because people are always telling stories, but not everyone is willing to sit down and read yours, let alone pay for it.

That’s what I tell myself when the boss pulls me to the front counter to cross-examine the red roses I’ve processed from the back. She rips them from their vase and hands me the bouquet. The thorns bite my fingers.

Really? she asks, stealing one away. This is beautiful?

I shrug. If they’re not purple and bruised, I see nothing different from one bud to another. But she stares into each roses’ center and picks apart petals with manicured hands until they’re tight and rounded as red cinnamon rolls.

Don’t take anything less than perfect, she says, going through the bunch quickly, pronouncing half of them worthless. Water droplets shine against the countertop. She says, Toss the ones that aren’t.

I think that to myself, as I’m sweeping up the petals she tossed on the floor.

(There was a trashcan at her elbow.)

Except it’s kind of funny that yesterday the shop made $10,000 and change, while I’m working for ten dollars an hour. And after I close the shop at six, I’ll go to my other job to close and make even less there, though I like it more.

And on the way home from either job, I’ll pass the dead president’s house sitting unused among the twilight and the countless mansions after it. And while I gaze blankly up at them, waiting for the light to change, some person perched in their sitting room will see me gawking and think I’m dreaming of the day when I can own my own palace at the end of the road.

But in this moment before the light turns green, all I can think about is the tiger-lilies dotting up the hill to my childhood home, where some green sludge has crept up our white plastic fence over the years and my bedroom’s ten feet by twelve feet with a single window to the street below. From that window, I once watched the stalks shoot up green every June and explode in July. Now they’ve crisped and waned in the heat, but the last orange petals glitter in the sunlight, more beautiful in their death and exhaustion than any fallen petal or fractured crystal in the dead president’s house.