My earliest memory was when I was eight years old.

We were visiting my grandparents, as always. The Kalebjians were Armenian so, by nature, we were rowdy and outgoing. My Nana and Papa were devoted Christians and loved God. My life was simple: go to church on Sundays and always make time for Wednesday bible studies. My grandparent’s kitchen walls were covered in biblical quotes and grace was said before every meal. It was a place where I always felt safe. The house was full of relatives and kids running around. After playing hide and seek, truth or dare, house, and pirates with my cousins, my mother told me it was time to wash up before dinner. I was transforming from a child into a young woman who was developing body odor – I was not going to argue with her.

The powder room was just down the hall from the dining area. It was a quaint room with a single sink, a porcelain toilet and shower. The heavy fabric shower curtain was decorated with pink flowers. Once inside, I locked the bathroom door and proceeded to undress myself. I always liked being able to lock the doors in my grandparents’ home. Back at my house, the only door that locked was my mom and dad’s bedroom door, so it was refreshing to know that I could enjoy some privacy when I wanted it.

Once the water reached the temperature to my liking, I jumped inside. Nana never had the good shampoo. It was always something like “hair nourishing” or “rejuvenating citrus” – also known as, Old People Shampoo. I would have liked to see some of my favorite cartoon characters on the bottle, but this would have to do. Once inside their shower, I closed the bath plug and let the water rise as I took my shower. I pretended to be a mermaid for a while, then a pirate, then decided that it was time to finish up. My hands wrinkled as if raisins replaced my fingertips. I did not like raisins.

After the old-person shampoo was rinsed out of my hair, something caught my attention. There was about a ten-inch gap between the shower wall and the curtain, and the stall became clouded by a hooded figure. I peeked through the gap and saw a faceless, bodiless, legless apparition. It was entirely black, the darkest shade of black I had ever seen. It slowly floated from the door to the opposite side the bathroom. It never made a sound. Not one. It never once acknowledged my existence. I was not afraid, though. I was stunned more than anything. This wave of peacefulness came over me as it moved. There was nothing to be afraid of. I only began to feel fear when the apparition passed my line of sight. Once it levitated past the shower curtain, I quickly ripped open the plastic veil and, just like that, it was gone.

I was now the only figure in the bathroom. I never once doubted what I saw. I knew it was real. The mermaids and pirates were imaginary. This was real. I hugged my naked body and started to hyperventilate. I cried for my mother. No answer. I then called for my father. Again, no answer. I was now calling for anyone’s aid, but no one came.

It was the first time in my short life that demanded courage. I was going to have to step out of the tub and into this new, frightening world where fear is the ultimate prey for the apparitions— and I was its vessel. Quivering, I pretended to strap knight armor over my body and prepare for battle. I turned off the water and grabbed the first towel I could find. Being dry and warm was not my priority, but finding the truth was.

I quickly wrapped the oversized Ninja Turtles towel around me and proceed to tear open the bathroom door. I was stopped, the door was still locked. My head spinning, I unlocked the door and ran into the dining area.

My family was oblivious. We were all incredibly close, so it was not uncommon for a small grandchild to walk around clumsily with nothing but a towel for clothes, asking a parent what they should wear. The adults only saw a child searching for her mother after a bath and went about their business. No one knew what I had just seen. No one had heard my cries over the lively conversations in the dining area. Loud, bellowing laughs and conversations muted anything else that was not of the same octave. My cousins still played their games, the adults still talked current politics, and my grandmother was still busy in the kitchen.

I went up to my mom, body still dripping, and confronted her. She saw the wet footprints I left behind as I looked for her in the familial crowd, disappointment was apparent in her face. But it did not matter, I was angry that she never came to my rescue.

“What are you talking about?” my mother responded.

“Did you not hear me yelling your name?” I cried.

“No, is something wrong?” she said, “Are you alright?”

I told her what had happened to me, I told her everything I saw in the powder room. After hearing my story, she told me that everything was fine, I had just imagined it. I investigated her eyes and I knew she believed me. She knew that I was not imagining that hooded shadow.

It never stopped after that. Time after time, I would see things. I could hear things, feel things. As years passed, I got accustomed to these apparitions. It never got less terrifying, though. I continue to peek over my shoulder when one of them breaths down my neck. I always sleep with a light at night, the dark allowed the apparitions to move freely. I do not know if this is normal. Can anyone else see what I see? Can any of my friends or family feel what I can feel?

I am petrified for the day that these apparitions will be able to see me as well. 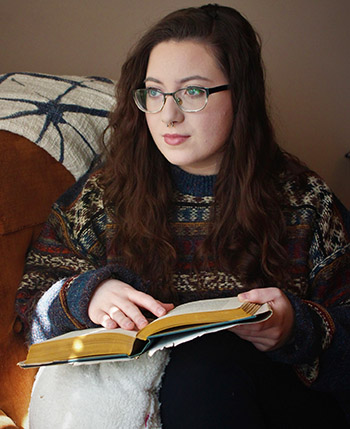 RILEE D. PHILIPPI’S love of writing began at a young age, and has escalated into a career and a passion. She studies English and Creative Writing at the University of Southern Indiana. Her work has also appeared in The American Library of Poetry, and Bridge is her second publication.