The parakeet was dead. It had been there for days, lying at the bottom of its steel cage, gray feathers strewn across the kitchen floor. Finally, the older sister placed the body in a pan on the cast-iron stovetop, doused it in oil, and burned it with a match.

“Why are you cooking my bird?” said the younger sister, standing at her elbow.

Cora shook her head over the flames.

When the bird was a pile of black ash, she poured the body into a small glass jar. Then she put the jar on the counter at the kitchen table, eyes closed, head bowed over her knees. By the door, Aisling was tying her shoes, but Cora did not look up.

“Where are you going?”

“To bury my bird,” said Aisling, pale face hidden behind strings of dark hair. “She can’t go to heaven ‘til she’s buried.”

“Tomorrow,” said Cora, tugging at a blonde strand on her forehead. She ran a calloused hand across her forehead, leaving an ashy smear. “It’s late, and the ground is frozen. Leave it be.”

Aisling continued putting on her shoes, then walked into the kitchen and took the jar. Cora glanced up as her sister’s silhouette retreated, but didn’t move from her chair.

“Aisling. It’s freezing out there.”

“What d’you know?” said Aisling. “You never even go outside.”

“Maybe I just know cold weather is bad for me, like any other sane—” She caught herself. “Just—come back here.”

Aisling turned away, and Cora studied her hands in the yellow light of a naked incandescent bulb. Somehow soot had settled into the spaces beneath her fingernails and left smears along her palms. There would be cleaning to do tonight to keep the counters from staining. That had once been her mother’s job.

Aisling pulled the door open, and a gust curled into the room, scattering ice shards across the formica tiles. She could wipe them away now, Cora thought, or she could simply let them melt.

Aisling was still in the doorway, shuffling her feet, her rounded fingers clenching and unclenching around the jar. Her head turned almost imperceptibly towards the kitchen, then turned back. Her body, outlined against the snow outside, suddenly looked very small.

She moved to stand, then hesitated. “Come back,” she said, less harsh this time. But Aisling turned back to the door.

Finally, Cora pushed the chair away, taking two jackets from the closet. She handed the smaller one to Aisling, but said nothing when Aisling dropped it on the floor.

They stepped into the snow, once powder, now crusted over with ice. It cracked underfoot, sending murmurs into the night.

“No,” said Aisling, stomping a hole into the snowy sidewalk.

“If Mom were here, I think she’d want you to go to sleep.”

Aisling gave Cora look of intense dislike. “And how would you know?”

Cora had no answer.

They walked around the block, watching their shadows extend and recede in the yellow light of the street lamps. Finally, they stopped at the corner by the dumpsters, where the snow was streaked with gray.

Cora looked down, prodding a lump of snow with her foot. “You can scatter the bird’s ashes now,” she said.

Aisling crossed her bare arms “I thought we were burying her.”

“For the last time, Aisling—”

“Of course, of course. I should have known.”

“You are,” said Aisling. “You always, always are.”

“You can bury it if you want.”

“For the last time, she’s my bird. She was alive once. She could fly.”

“But did you see it? Did you see how much she loved us?”

Cora studied Aisling’s face, rounded out by the yellow light. They weren’t talking about the bird anymore, she realized. Aisling needed something from her—an answer, an understanding—but what did she have to give?

She strained for a response, but instead watched as Aisling’s face hardened and turned away. The moment fell away into the snow, and the air settled into their bodies, dry and cold and lifeless.

Finally, Cora cleared her throat and unscrewed the cap of the jar. When she looked up, Aisling was staring at her, eyes dark like marbles.

“You think this is stupid too, don’t you?”

They emptied the ashes onto the snowbank, wiped the jar clean with a handful of ice. For a minute, neither of them moved.

“What now?” the younger sister asked, almost to herself.

We go home, thought the older sister, but she knew it wasn’t an answer either.

They stared at what was left of the bird, but no wind came to blow the ashes away. On the background of once-white snow, the ashes could have been any other lump of mud. 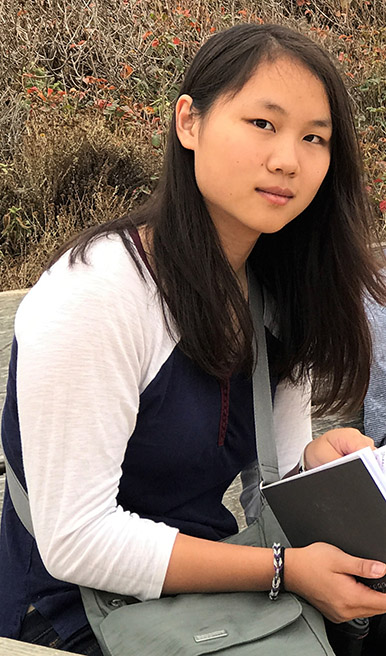 KATHERINE XIONG lives in Princeton, New Jersey. She is a junior at The Lawrenceville School, where she copy edits the school newspaper and reads for the school’s literary magazines.