Salvation Christian Congregation is nestled along Lake Anamath at the tip of Minnesota. The water teems with fish that shimmer like opals in the sunlight, specially stocked for campers to catch and cook over roaring campfires. The cabins surrounding the camp are wooden and laden with vibrant, olive hued moss, each one named after a notable biblical character. Adam and Eve stand across from each other, with Phillip and Esther close by. I’m staying in Lydia, which is swamped by the thick northern evergreens that engulf Salvation for miles, barricading us from the poisons of the outside world. At Salvation campers aren’t allowed to have any phones, tablets, TVs, or computers. It’s supposed to be a time for us to reconnect with God. The camp’s only news outlet is a daily issue of the Star Tribune that gets delivered to the counselor’s lounge.

Completely peaceful…almost. But huddled within the tall grass lie vipers—quick to sin and even quicker to judge.

Unease settles around me like smog as I drift through the camp. I feel as if every word I say, every scripture I quote, every face my eyes trace is under scrutiny. I feel too close to God when I’m here. I prefer to keep Him at arm’s length; I don’t want God to see the sin that’s poisoned my heart.

It’s small group time. The campers are split into three groups for more targeted wisdom sessions with the pastors. Today we’re learning about how to maximize our spiritual gifts in a world where the fastest growing religion is atheism. I sit next to my best friend in the dining hall, littered with folding lunchroom tables and the smell of overly processed deli meats.

“There are a lot of strange things happening in the world around us today, kids.” Micah, our pastor, begins, pacing up and down the room. I’ve always put all my faith in God, but sometimes it’s difficult to understand how God's well laid plans could have gone so far astray in my world. I nod anyway, along with the forty other devout Christian teens in the room.

“For example,” Micah continues, “Yesterday, according to the Star Tribune, the Supreme Court passed a gay rights amendment allowing couples of the same sex to marry nationwide. And in its honor, Burger King released a commemorative ‘Pride Burger.’”

Gasps and grumbles rise up from the sea of students. Whispers laced with venom lick around me as a boulder forms in my throat—my dirty little secret bubbling to the surface.

“Why do the faggots need a burger? There’s nothing to be prideful of,” my friend Julia exclaims to the table around us. She tosses her dark hair over her shoulder proudly as the other campers nod in agreement, the bolder ones following suit by mixing up their own slur cocktails.

She rolls her eyes, “Fair point, Hannah, but I don’t want them eating the same food as me.”

My face burns scarlet as I remember how we shared lunch together today. She’s completely oblivious to my affliction, but might as well brand me with an L.

I’ve known what I am for a while now, and I’ve known how I feel about Julia for even longer, but that doesn’t make it any less sinful.

Julia nudges me, smirking, gesturing to my flushed face, “That upset, huh?”

I nod, trying to keep my eyes from landing on her walnut brown ones. “I’ll be fine. My stomach is just a little messed-up from lunch.”

Julia nods sympathetically. My hands curl into white-knuckled fists as she wraps her arm around me in comfort, kneading small circles into my back. “I understand, thinking about them makes me sick too.”

“Why is love such a bad thing?” a girl—I think her name is Jessie—says, cutting through the chatter around us. Her voice shakes, but her words land like a gut-punch.  The hall is silent as the teens around me practically seethe with deadly rage, fangs extended, ready to pounce. Pastor Micah turns to face Jessie. “Leviticus. Thou shall not lie with a man as one lies with a female; it is an abomination.”

He turns his back, thinking that would satisfy the red-headed girl.

“Jesus. Blessed are the merciful for they shall obtain mercy,” Jessie retorts, primed and ready. She gnaws on the inside of her lip, fingernails digging into her palms.

Julia’s hand falls from my back as the Biblical showdown continues.

Micah’s eyes narrow. He was obviously not anticipating a challenge, but is unwilling to back down—especially with the crowd on his side. “Genesis. The outcry against Sodom and Gomorrah is so great and their sin so grievous.”

“Jesus. He, who is without sin among you, let him cast the first stone.” Jessie retorts, the crowd’s energy shifting with each jab—caught between their sheltered Sunday school upbringings and the validity of her points.

The counselors nod their support for Micah, silently trying to sway the campers while maintaining some semblance of disengaged professionalism. “Deuteronomy. A woman shall not wear a man's garment, nor shall a man put on a woman's cloak, for whoever does these things is an abomination to the Lord-.”

Campers whisper among themselves within their tables, some boldly in favor of Jessie’s truth, while the majority—Julia included—reject her.

“Galatians. The fruit of the Spirit is love, joy, peace, forbearance, kindness, goodness, faithfulness, gentleness and self-control. Against such things there is no law,” she finishes, eyes hopefully flickering around the room, searching for sympathizers. Finding none, she adds, “There’s no law against love.”

Jessie stands in the center of the hall, chest heaving in exertion as another thick silence settles over the room. It looms for a moment, capturing a watershed moment within my own soul as tears fill my eyes, until it’s broken.

“Fag lover!” A boy hurls from Jessie’s table, leading the barrage of insults against the crestfallen girl. The room falls into chaos.  Fear has overtaken the masses, causing them to lash out.

Jessie is taken aback, shocked. My face is drizzled with tears as a sad smile drifts across my features, this must be her first time at Salvation. I feel bad for her—I really do—but I can’t contain my relief. I laugh, a grin slicing me ear to ear. I’ve prayed for years, begging God to change me. Begging him to let me feel even an ounce of attraction toward the boy that took me to homecoming, instead of towards my best friend. I’ve yearned to grow out of this phase. I’ve prayed and begged, and sobbed, and howled, and wailed for change, but all along I should’ve been praying for acceptance. Not the acceptance of others, but my own. I’ve prayed for God to come back to me—to let his favor shine upon me once again—but he’s been guiding me this entire time.

“Burn in hell dyke!” Julia screams.  When she turns and sees me crying, her demeanor changes entirely.

I keep repeating “He never left me…” like a chant between each sharp breath and sob, burying my face in my hands.  Julia pulls me into an embrace, my head falling into the hollow of her neck as one of her hands rubs soothing circles into my hair.

Jessie runs out of the dining hall, tears of shame drooping from my eyes. We all know what happens to people like her—the ones that don’t conform. Her parents will be called; they’ll bring her home—pamphlets for the conversion therapy camp across Lake Anamath clutched in hand—never to be seen by the likes of Salvation again. I want to chase after her and tell her to run—run and never look back at this godforsaken place—but my body morphs into putty within Julia’s arms.

“That’s right Hannah. God will never leave you.”  I just let her hold me, relishing her touch. 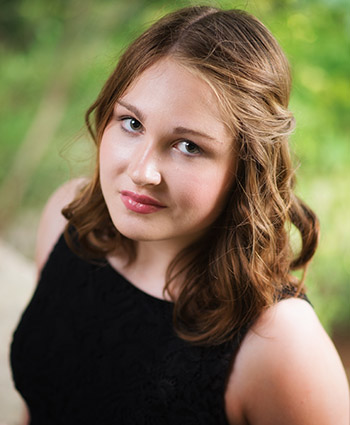 DIANA HUMBLE is a junior from Stewartville, Minnesota. She's currently pursuing Pre-Med with a double major in Creative Writing and Communications with a minor in English at Waldorf University. In her free time, she's inducing early arthritis by virtue of her Guitar Hero addiction.