My mother won’t buy me the pills, anymore. She used to, before she realized that they suppressed my gift. Those were better days. Days when I didn’t have to fight so hard to not slit my wrists.

She sets her hand on my shoulder and taps three times: our signal. The three taps tell me two things: one, it’s my mother, and two, the blindfold is about to be removed.

We used to do these readings in public places, like street performers, but someone my mother called an “overly satisfied customer” tried to kidnap me when I was eleven, and because of the blindfold I hadn’t known to fight the hands that grabbed me because I thought it was her pulling me out of the way of a speeding cyclist. Now we have our codes, and we’ve set up shop at home.

The eyes I meet are worried, and the expression surrounding them pinched.

“Coco is going to live,” I say. The woman seated across from me slumps with relief.

The blindfold goes back on. I hear the woman leave a few moments after that: a repeat customer who knows not to expect more. Most of the new ones stay and try to ask for details; some have even attempted to shake clarifications out of me before my mother muscles them out of the house. My regular clients know that I can only tell them what they need to hear once, until their circumstances change.

The rest of the day's readings are all caught on camera by my mother. She’s planning to make a web series with all the footage, but I know it will never come to fruition. All the money we make, all of her free time, all of it goes right to her addiction.

She knew to get me the pills when I first started showing symptoms because she has depression, too. She never took the pills herself, because she’d already started self-medicating with heroin. An expensive and dangerous vice, but at least it keeps the depression from consuming her like it does me. Even though I’ve begged her, she won’t let me have any, and she keeps her needle set locked up in her room.

The footage is interesting to me, though. Curled up in my little bed in the basement with a razor blade in my hand, I go through it all. I love the specific ones best, like, Kevin is gay but still not interested in you, and, the password is 99817, because they let me imagine the stories surrounding the people that most needed to hear them. I fast forward through the placid encouragement: things like you’re doing the best you can, or, they’ve found peace and so can you, because the people I say them to almost always start crying.

My mother brushes my hair the next morning because there are no mirrors in the house, except in her room. She says she doesn’t want me to be vain. I’m glad of it: I don’t want to see what hides behind my eyes.

The blindfold goes on and comes off and goes back on again.

“You forgot the data analysis folder at home.”

“Dress up nice on the first Monday in April.”

Some people are unsatisfied with what they hear: they were hoping for the dirty secrets of an ex, or for a way to get rich. Mostly, it’s an odd combination of reminders, advice, and strange hints of what’s to come. One man once jokingly complained, “Of all the things I want to know, the powers that be decided that what I need to hear the most is that I should get new shoes?”

When I start wearing long sleeves in the summer, my mother searches my room and confiscates the razor blade. I’m almost always blindfolded around her, because she hates to hear what the universe thinks she needs to know.

“I thought we were past this nonsense, Cyan!”

“Oh, honey,” she cuts me off. I feel her weight sitting down on my bed beside me as she pulls me into her arms. “You don’t need pills to feel better. They suppress what makes you special. Think of Van Gogh, the famous artist! If he’d had pills, we wouldn’t have Starry Night, now would we?” She pauses and folds her arms to rub the insides of her elbows. I’ve noticed her doing that a lot recently.

“Mom—” I start, but she presses on, almost babbling:

“You’re young, and young people have mood swings. It’s hormones! I’m not going to pump my daughter full of drugs because of perfectly natural teenage hormones, now am I? That would make me a terrible mother.” With that, she takes all the sharp things, things that could be made sharp even, out of my room, and locks the basement door from the outside that night.

Every night after that, too.

Once and only once, my mother left her computer open on the website. It advertised me as “The Girl Who Will Tell You What You Need To Hear Most For $50!” and had a section for people to leave reviews. While she was high in the living room, I sat in the kitchen and read at least a hundred of them, each ending nearly the same way: it really was exactly what I needed to hear!

As the word of my ability spreads, she jacks up the price. Soon my readings cost $100, $200, $300 a pop. In her good moments, she buys us new clothes and good food that tastes like cardboard in my mouth. In her bad moments, she gets higher than ever with her supplier, who sometimes spends the night. I watch the footage over and over and try to think of ways to hurt myself that won’t show, with things she won’t be able to confiscate. The days go by, and the blindfold catches my hair when my mother knots and unknots it again and again and again.

She manages to keep it together during the day, while I’m doing readings and she’s soliciting customers, even though I occasionally catch her shaking. She starts to wear long sleeves too, to cover the insides of her elbows.

One night, a moment after the last customer leaves, she grabs her needle set and shoots up while I’m still blindfolded, and I have to fumble with the knots on my own.

I retreat to the basement, afraid of her wrath, and when she doesn’t come to lock my door, I know she’s gone. All the things she ever told me would happen if I ran away, if I told anyone what she did, begin to run through my head. I feel myself starting to spiral, and soon I’m rummaging around in the basement for something that will cut.

Until I remember that the door is unlocked.

I stumble to her body on the floor, her lips blue, her needles splayed beside her. I find that not even the universe has anything to say to her when I look into her dead eyes.

There are no knives in the kitchen drawers. My mother is smarter than that; everything is locked up in her room. I fish around in her pockets for the key, and as I walk up the stairs, I run the its dull teeth over one of my newer scars. The pain helps keep me focused.

Her room is a mess, but I know what I’m doing. I head straight for the bathroom. There are a lot of sharp things in there. I unlock the door, and what greets me is a mirror and the words that I need the most, the words that make me leave my mother’s razors in her shower, go downstairs, and call 9-1-1. 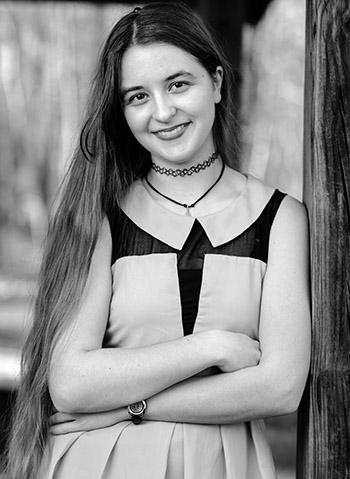 EMMA HINES is a high schooler trying her best to juggle homework, college applications, a part-time job, and writing while still getting a full eight hours of sleep. She considers herself a “carbovore” and her peers know to bribe her with chocolate. Her work has also appeared in The Scarlet Leaf Review, Gathering Storm Magazine, and The Wolfian Press Review.
Top
©