CHARLES: 20’s. Any gender or race. Dressed Victorian, in a steam punk fashion.

CHARLIE: 20’s. Any gender or race. Dressed bizarrely, like a sci-fi punk.

JOHN: Any gender, race, or age. A college student.

(Lights up. CHARLES and CHARLIE stand in their respective apartments, facing the audience.)

CHARLIE: Everyone has that person in their lives.

CHARLES: And that moment you finally meet them, you just know.

CHARLIE: (Looks to CHARLES)  I saw CHARLES on a Wednesday afternoon. It was 2002, I think.

CHARLES: (Looks to CHARLIE)  We made eye contact and then—

BOTH: It was hate at first sight. (Both look back at the audience.)

CHARLES: We fought right there on the street. CHARLIE turned out to be the child of my father’s arch enemy.

CHARLES: And like my father, I became a hero.

BOTH: —perfect balance. (They look at each other.)

(CHARLES and CHARLIE are in their respective rooms. JOHN is in CHARLES’ apartment. They are sitting at the table and having tea together. CHARLIE and MOYEN are in CHARLIE’s apartment. CHARLIE is working on the machine. MOYEN stands beside CHARLIE, holding a book.)

CHARLIE: It’s called biological warfare, cousin.  I don’t expect you to understand- (CHARLIE drops a tool, breaking something out of the machine.) –Oh.

MOYEN: I’m not sure you should be doing this if it’s so dangerous. Not inside any—

CHARLIE: Shut up. That wasn’t essential. I know I’m doing. (CHARLIE grabs the tool and piece, shoving into the machine.) CHARLES won’t know what hit’em. If I can control all the chemicals in Char’s brain, I can— I can… Work in some depression. (CHARLIE slams the door to the inside of the machine.) Or something.

MOYEN: According this you’re making—

CHARLIE: Power it up you hencher!!

(MOYEN sighs but does as asked. The lights flicker. CHARLIE laughs villainously. The machine powers up, grows louder. CHARLES and JOHN look around the  apartment in confusion.)

MOYEN: (Trying to yell over the noise, backing up.)  We probably shouldn’t be so close to it!!

MOYEN: IT SEEMS RATHER DANGEROUS TO BE POWERING UP INSIDE—

(An explosion. The lights go out and then turn to red. MOYEN and CHARLIE both scream. JOHN and CHARLES are annoyed by the disruption of the lights in their apartment. Smoke comes from the machine. Slowly the lights return to normal.)

MOYEN: (Flipping through the book.) I tried to tell you that you were missing—

MOYEN: Here. “Without the alpha particle reactor, the machine will not produce the desired effect”—

CHARLIE: That means it didn’t work.

MOYEN: You wrote this. “—The machine will instead create in the target a feeling of love towards the person they think about the most.”

CHARLIE: If we were dead, well, that could be something to work with but— Wait. What?

MOYEN: “The machine will instead create in the target a feeling of love—”

MOYEN: You wrote the thing.

CHARLIE: I must be working with science beyond anything currently known to man…

CHARLIE: What’s that supposed to mean?! You were in the room with me.

MOYEN: Yeah, but I already love the person I think about most. You, on the other hand, are a cold hearted—

CHARLIE: Cousin dear, your name literally means average, in French. Clearly the God of our world doesn’t have any big plans for you. Don’t get uppity.

CHARLIE: Still. You may be right. This could compromise my image as a villain.  I suppose that I’d better check.

(CHARLIE dials a cellphone and makes a call. A landline rings in CHARLES' apartment. He picks it up.)

CHARLIE: Are you calling me from a landline?

CHARLES: Can you tell?

CHARLIE: You disgust me.

CHARLES: Is there something you want? Was that you? With the lights?

CHARLIE: Yes! Yes. Uhm, in fact, it’s a weapon. A weapon— an electricity weapon— some sort of power draininator. I’ll—

(CHARLIE continues to make up some grand and nonsensical scheme. CHARLES drops the landline and leaps across stage into CHARLIE’s apartment. CHARLES moves into a fighting stance.)

CHARLIE: Oh. Wow. Your timing is getting better.

CHARLES: I am nothing if not impeccable—

CHARLIE: And you had me at nothing.

(They fight. MOYEN tries to stay out of the way. CHARLIE and CHARLES banter. They must upset every piece of furniture in CHARLIE’s apartment and cause general disarray. The fight ends when CHARLES manages to pin CHARLIE down.)

CHARLIE: Yeah, I’ve got something to confess.

(Both CHARLIE and CHARLES sit in CHARLES' apartment, drinking tea. CHARLIE’s apartment is being straightened up by MOYEN, who can leave or take breaks or just sit in the middle of the room. JOHN is not in either room.)

CHARLES: So you’re in love with me?

CHARLIE: Well, “love”— see— what does that even mean? Love is just a bunch of chemicals – propagation of the species— a survival note— an easily manipulated aspect of biology. It’s nothing special. Just science.

CHARLES: So you’re in love with me?

CHARLES: In some form of lust with me?

CHARLIE: If that’s the only way you can comprehend the complexity of what I’ve done— yes.

CHARLES: I don’t mind that.

CHARLIE: You wouldn’t. You goody goody types are always on about the powers of chemical imbalances. You’d have us all going insane, despite ourselves.

CHARLES: Not lust so much, no. But yes. You seem in control of it.

CHARLIE: I’ve had a lot of practice hating you. We should find a way to cure this before it gets any worse.

CHARLIE: Yes!! What choice do we have? Can you even imagine what our fathers would say if they saw this?

CHARLES: Our fathers are dead, Charlie.

CHARLIE: Can’t be disappointing their memories then.

CHARLES: You know, I’m not always a perfect hero.

CHARLES: Sometimes I do things that are selfish. I’m not perfect. I’m not always traditionally “good.”

CHARLIE: That makes you evil then. Congrats. Why even fight?

CHARLES: Is that intentions or actions?

CHARLES: Mathematically I should be good then.

(JOHN enters the room and sees CHARLIE and gasps. JOHN goes to CHARLIE.)

CHARLIE: I don’t want to talk to you, John. I never have.

JOHN: But— I thought our relationship was improving!! Since that last fight!! I saved you!

CHARLIE: Saved me from what? Charles? I wasn’t in any danger at that hero’s hands. Please. And your betraying him was pathetic. He’s your roommate, you asshole— why are you even rooming together?

CHARLIE: I think that’s because of the obsession with me. I’m so over this.

JOHN: I’m not “obsessed”. We’ve been friends for years!!

JOHN: I’m really trying here. Give me something to work with. Anything.

CHARLIE: I’ve given you my hatred.

CHARLES: John, please, you know how Charlie feels. You know that she’s evil. This is getting somewhat desperate. Try for someone better perhaps?

JOHN: I just don’t get it… What am I doing so wrong? All I’ve ever done is be nice to you!

CHARLIE: Wow. Okay. Let me give you a final, and simple knowing you, answer to that question. I hate you. Like, really hate you. And I don’t mean that playfully— like the kinda way I hate Charles, who’s at least somewhat useful. We will never be friends, John. I will never jump in front of a bullet for you at the last minute. I will never not want you to die. In fact, if you were hanging off a cliff and I could save you by offering my hand I would instead shoot you in the head so that I could be absolutely sure you died when I didn’t offer it.

JOHN: I’m not going to believe that.

CHARLIE: Is that seriously a challenge?

(CHARLIE draws a weapon and aims it at JOHN. There is laser like sound. JOHN collapses.)

CHARLIE: (Sighs) Should have done that a long time ago.

CHARLIE: What? Worried that you’ll have to pay the whole rent yourself, now?

CHARLES: …That is true. But, no. Murder is wrong. He had an entire life left to live.

CHARLIE: I did us all a favor then.

CHARLES: I’m going to have to inform his mother—

CHARLIE: That is how these things go.

CHARLES: (Stands up to go kneel beside JOHN)  If you really don’t value life I’m not surprised by your choices. By… what you want from me today.

CHARLES: I can’t teach you to understand why life means so much. Why it’s so important.

CHARLES: Not only him. Such a waste… You do realize we have to fight now?

CHARLIE: That was part of my cost-benefit analysis, yes.

(They fight again. There is no banter this time. Again, every piece of furniture is disrupted. This time CHARLIE ends up winning the fight but pauses, weapon aimed at CHARLES. CHARLIE lowers the weapon.)

(Both sides of the stage are still in ruins. JOHN is still lying dead in CHARLES’ apartment. MOYEN is gone. CHARLIE and CHARLES are on their knees by the machine, which has been reopened.)

CHARLES: This is what happens when you aren’t careful, cautious, and don’t quite understand what you’re working with.

CHARLIE: It’s really annoying that everything is a moral with you.

CHARLES: At least I learn from my mistakes.

CHARLIE: Can’t be a mistake. The machine worked.

CHARLES: How can that be? You’re trying to fix— nevermind.

CHARLES: Don’t you ever get tired of bantering?

CHARLIE: No. Besides, if you do we can just have tea.

CHARLES: But you won’t ever change and I’ll never listen to you with any degree of serious consideration. We’ll never go anywhere. What’s the point?

CHARLIE: That’s what balance is.

CHARLIE: (Slamming the machine and standing) There! Got it! Let’s do this! Love is exhausting. Set me free, science!

CHARLES: (Grabbing CHARLIE)  Is this really for the best?

CHARLIE: I don’t remember to consenting to love you.

CHARLES: Even it being me? Even though it didn’t fade?

CHARLIE: Oh, no, that’s just because you’re constantly on my mind, see—

(CHARLES pulls CHARLIE into a hug. At first CHARLIE is stiff, but slowly hugs back.)

CHARLES: Is this nice?

CHARLIE: Is heroin nice? I know what’s good for me.

CHARLES: No. You don’t. You want to feel negative things, cause negative feelings. You want to be evil, you can’t know what’s good.

CHARLES: We don’t have to be lovers. There are so many forms of love. Friendship, brotherhood, sisterhood, the love of family, the love for a pet.

CHARLES: We keep saying we hate each other.

CHARLIE: Don’t you want to hurt me?

CHARLES: Yes. You’ve hurt me. Do you want to see me dead?

CHARLIE: I’d be so bored.

CHARLES: We can change then. Even… after all this time.

CHARLES: You always told me you didn’t believe in fate.

CHARLIE: Charles, our fathers hated each other. Mine was evil. Yours was good. And now I’m evil and you’re good. It’s that simple. Black and white. There will always be a struggle. We are the next cogs in time’s wheel. That’s not fate. It’s fact.

CHARLES: (He places his hands on CHARLIE’s shoulders.) Our fathers killed each other.

CHARLIE: That’s… romantic in a sense.

CHARLES: Do you… want that?

(CHARLIE turns to the machine and kneels.)

(CHARLIE turns on the machine.) 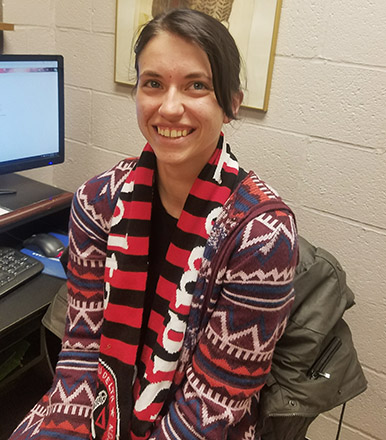 RACHEL WHITEHILL is an undergraduate student at Thomas More College, where she has written and performed a show and is currently pursuing a degree in Creative Writing.