Marvin could smell vanilla and cinnamon wafting into the garage as he slid his left foot out of his leather, rubber-soled work shoes. She baked, he thought. He slipped his right foot free from its shoe. He tucked his boots into their spot on the metal shelving, shelving that had occupied the same place in the garage since the day they moved in some thirty some years ago.

Marvin let the door clatter shut behind him.  With each step he took toward the kitchen, the vanilla and cinnamon intensified and heat from the oven warmed him.

On the counter, three loaves of bread rested on metal cooling racks. He passed his hand above them. Their heat brushed his palm.

“I’ll be right there.” He said, sliding open the silverware drawer in search of a knife to cut himself a slice.

“Don’t you touch that bread, Marvin. It can’t be cool yet.”

Marvin slid the drawer shut; the silverware clinked. Ears like a bat, he thought.

His wife Lucy was in her favorite chair, a maroon plush recliner─ though she seldom tipped it back or raised the foot rest. She preferred to sit upright, her petite frame swallowed by the overstuffed cushions. She’d glance up from her crocheting whenever something interesting was happening on the TV screen. Today, Marvin found her working on an afghan while watching the local five o’clock news.

“What kind of bread is it?” he teased.

“Banana. Norma’s recipe,” Lucy answered. She did not look up from her yarn. Marvin took a seat on their plaid couch and waited. Since the woman’s passing, Marvin had taken to avoiding the subject of Norma Jean, her recipes, her house, her flowers, anything that could launch his wife into a crying jag over the loss of her life-long best friend.

“I figured it was only right to make some for that girl who bought Norma’s house,” Lucy paused to swallow. “One of the loaves is for her. I’m going to take it over there tomorrow.”

Lucy laughed and looked up from her knitting to her husband. “Yes, but I’ve got a roast in the crock pot for dinner, and the loaves aren’t quite cool, so you are going to have to wait for your dessert.”

“Alright,” Marvin murmured, laying down on the couch. “Wake me when it’s ready.”

Marvin was waiting on a customer when Lucy came into the co-op. He’d operated the place for twenty-three years, ever since he inherited it from his father. Marvin kept the same hours as his dad had and stocked the same supplies─ animal feed, seed for farmers, garden plants. Lucy worked alongside him sometimes, as did their son, Greg. Today, Marvin could tell that Lucy was in a state. Her eyes were wide and she held her right arm around her body; in her left hand, she held a loaf of bread wrapped in foil.

Marvin handed the customer his change and said, “Greg’s out back. Why don’t you have him help you load that mulch, Derek?”

The customer thanked Marvin and smiled at Lucy as he left the store. Most days Lucy would have tried to chat with Derek, asking after his family...but not today.

“You’re going to have to do this, Marvin,” Lucy said, setting the bread on the scratched and dented countertop. She placed both of her hands beside it, palms flat, fingers spread wide. Her clean hands contrasted with the dirt and grime-stained counter.

“Do what?” Marvin asked, confused.

“Take that banana bread over.”

“I can watch the store with Greg.”

“Lucy, I…,” he lifted his hand and ran it through his salt-and-pepper hair. Lucy stood facing him with her feet planted. He stared down at her white Keds, the same style she’d been wearing since he first met her in the tenth grade. He thought about who she had been then. The kind girl, who spent her study halls in the library tutoring the middle schoolers in grammar lessons and chatting with the school librarian, Norma Jean.

Despite the age difference, Lucy and Norma Jean had been friends ever since Norma helped Lucy learn to crochet, so that Lucy could pass Home Economics. Marvin couldn’t imagine losing a friend after fifty-some years. It’d be like losing her, Marvin thought, raising his gaze to meet Lucy’s brown eyes.

He laid a hand on her shoulder, and picked up the banana bread.

“Marvin,” Lucy watched him walk towards the door from her post behind the cash register. “Tell her I’ve got a cold or something, but I’ll be over to meet her soon.”

He lifted his hand in acknowledgement.

“And remind her to take care of Norma’s tulips. They’ll be sprouting soon,” she called. The bell on the door jingled. Marvin strode out to his pick-up truck.

“Was she nice?” Lucy asked between bites.

“Did you tell her about the flowers?” Lucy asked, a slight hesitation in her voice.

“Yes.” Marvin took a bite of his dinner. He wanted to tell his wife how he had almost teared up when he rolled up that driveway for the first time in months, how the girl opened the door for him before he could even knock, and how she had been wearing an old denim shirt smeared with paint. How she smiled at him in a way that reached all the way to her eyes, how she stood in the doorway of Norma’s yellow house, cradling the loaf of banana bread Lucy made from Norma’s recipe, as she waved goodbye.

Marvin looked up from his plate and stared across the table at his wife, her eyes rimmed in red and a faint sniffling sound coming from her nose.

“She paints,” was all Marvin could say before the lump in his throat choked the rest of his words. 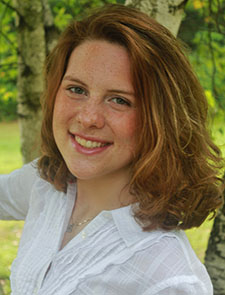 SYDNEY CRAGO is from Shaker Heights, Ohio, and is a recent graduate of Baldwin Wallace University. When she is not writing, Sydney spends her time reading, baking, and exploring.
Top
©