Five children stood in a line, their backs against the cold, aluminum shed. Another child, the oldest of the bunch, sat in a plastic chair, her legs propped up. The youngest stood next to her, red in the face and short of breath.

“Pick a color,” the oldest said. “Quick before Mawmaw makes us go in.”

The youngest shook, her legs aching from all the running. “It’s not fair! I’ve been the wolf the whole time!”

“You need to be faster, then,” the oldest said. The other five chorused their agreement.

“It’s not fair!” The youngest cried out again. “I’m going to tell!”

She ran across the yard and inside the house. The oldest just laughed and stood. She picked up a stick and pointed it at each of the kids. “So, who will be my next victim?”

She went down the line, jabbing her stick into each of their shoulders. She stopped in the middle; a short, brunette girl stood a little straighter. “Hanna, you’re the wolf.”

Hanna opened her mouth, closed her mouth, and scurried to the spot the youngest had been. The oldest whispered to each of the remaining four, giving them a new color, and then sat back down in her chair. “You know the rules, eggs. Around the jungle gym, around that tree, and then back here. You cut, you lose.”

She dropped her stick on the dirt and motioned for Hanna to start. Hanna took a breath, her heart raced.

“Who’s there?” The oldest asked.

“The big bad wolf,” Hanna said, her voice in a whisper.

Hanna closed her eyes and repeated, “The big bad wolf!”

Hanna searched the kids for a blue egg, each one shook their heads.

“Out the window!” they all called at once.

Hanna barely saw him start running. She took off after him, running as fast as she could. He was taller and covered half the distance in half the time it took her. He made it back to the hen house, safe. Hanna skidded to a stop in front of the plastic chair, kicking up dirt in the process.

Hanna lost again, then again, then again. They played three more rounds and then another before finally the sun was setting and their Mawmaw ushered them into the house. Each one washed up and went into the playroom. Hanna was the last one in.

The blue-green painted tables were moved out from against the wall and each of the kids sat in a chair around it. Mawmaw and Hanna’s aunt brought in plates of food: green peas, macaroni, cornbread, a hotdog cut into small bits, and ketchup. They each took their fork, stabbed a piece of macaroni, and dipped it into their ketchup; they did that with everything on their plate.

Once supper was over, the kids split up. Some of them colored, using the crayons in the box with their names on it. Some of them put on a movie about a small girl named Thumbelina. Hanna sat in her chair and stared at the unmoving ceiling fan. Red, blue, green fans. The other one, a yellow one, was missing, having been broken off during the years they all spent crowded in that room, forced together by blood and relation.

Slowly, their parents started to pick them up. The oldest and the youngest and Hanna were the last to be picked up by their mother. They all came back the next day and started all over again. The day after that too. All the days after until each of the seven kids had grown up. Until all the fans were broken off and all the names were faded. Until the jungle gym broke and the tree was cut down.

The oldest grinned, “Who’s there?” 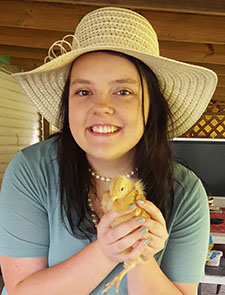 EMMALEIGH BUSH is from Laurel, Miss. She is a twenty-one year old English major at the University of Southern Mississippi. She has been writing since she was a child, starting with stories about talking fruit, Kids Next Door fanfiction, and comic books about a super tongue.
Top
©