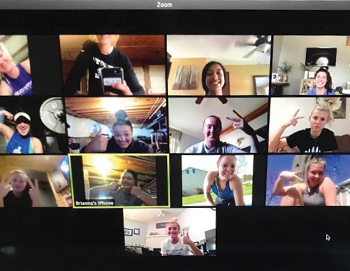 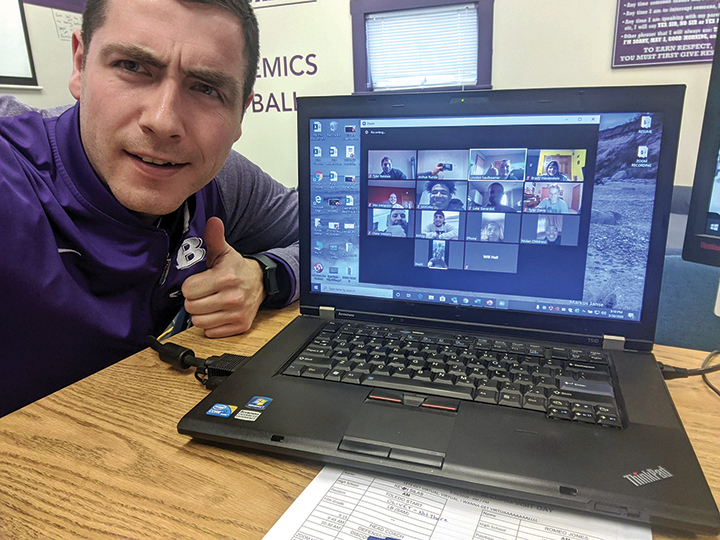 Responds to pandemic as beavers do.

In the late 1920s, long-time coach and athletic director A.C. Burcky suggested the beaver as Bluffton’s mascot. His rationale, according to “Dancing with the Kobzar: Bluffton College and Mennonite Higher Education,” was beavers are resourceful, don’t tire easily, accomplish more with less and work hard to make the world a better place. One hundred years later, that’s exactly what today’s Bluffton Beavers did despite their seasons ending early, classes moving online and the difficulties of being separated from their friends and teammates due to the coronavirus.

“Without having much to compare to in this situation, I believe the team responded well,” said Aaron Krepps, head football coach. “They would much rather have been on campus, but we ‘adjust to and overcome adverse situations’ just as the Beaver Pledge tells us.”

Adjusting from an athletics standpoint meant coaches hosted virtual team meetings via Zoom and other online communication platforms and increased the number of texts and group chats among players.

“Technology, cell phones, FaceTime, and Zoom have been awesome,” said Chad Shutler, head women’s basketball coach. “I can’t imagine how we would have navigated something of this magnitude 20 years ago.”

Team workouts were sent out by email and varied by season and sport. Student-athletes in cross country and golf were able to maintain a semblance of normalcy in their training at home but challenges remained.

“Getting out the door on your own is a lot harder than it is for a team practice, but our men and women have done a phenomenal job of staying positive and motivated despite their circumstances,” said Logan Wells, head cross country coach. “To put in the work they did without an immediate race or competition on the horizon takes drive and determination. They have been an inspiration to me.”

Many field athletes as well as golfers have sent videos to their coaches for tips on technique. Golf is also concentrating on a sometimes-neglected aspect of the game.

“We focused on the mental aspect of golf,” said Craig. “We looked at various articles and viewed different TED talks and videos to get better between our ears.”

Picking up a phone, as opposed to email or text, became more commonplace, as well.

“The topic of our communication varied from academics to basketball to simply the general topic of how they and their families were doing,” said Guy Neal, head men’s basketball coach.

“One week, part of the team ‘arrived’ to the Zoom meeting in their prom dresses,” said Amanda DeMoine, head softball coach. “This team continued to have a lot of fun together, and we remotely put a couple of videos together.”

For Bluffton student-athletes, academics remained a priority. Coaches typically have students turn in grade and attendance checks when on campus. While online instruction did not perfectly replace the on-campus academic experience, professors and coaches worked together to do their best with the resources available.

“I was in contact with several professors who tried really hard to accommodate our students’ new situations,” said Shutler. “They extended deadlines and bent over backwards to work with not just our athletes but our students as a whole. I continued to be impressed by their sincere caring and commitment to our community.”

Recruiting from a computer

Coaches also adapted to a new way of recruiting.

“Ninety percent of what I normally do, I couldn’t do anymore,” explained James Grandey, head baseball coach. “Instead of going to games, we worked on the last few recruits for 2020, and began to lay the foundation with the 2021 class.”

“Perhaps one benefit of high school students being encouraged to social distance and stay at home is there were fewer conflicts in their lives which allowed potential recruits to sign up for virtual visits,” said Steve Yarnell, head volleyball coach.

“Zoom visits did not replace the impact of an in-person visit, but it was a great option for the situation we were in,” added Krepps. “Recruits and their families provided positive feedback on our virtual visits.”

“This situation taught me to have a lot more trust in my players. I sent them workouts and had to rely on them to follow through and keep their end up to progress as we continued our journey to progress as a team,” said Harry Kirwan, interim head men’s soccer coach. “We had a mutual understanding and the guys responded excellently.”

“It is easy to be a happy and good person when things are going well, but you develop your character when times aren’t so good,” said Kevin Gregory, head women’s soccer coach. “I am extremely proud of our group—with how they handled themselves and looked after each other. We have a team full of very special people.”

“Our student-athletes responded with such maturity and understanding that it had even taken me by surprise,” said Kaylea Jachno, head track and field coach. “Of course they were upset that they couldn’t show the conference just how talented they were, but they understood that this was out of their control, and they chose to instead focus on what they could control—their training and academics. That excites me for next year.”