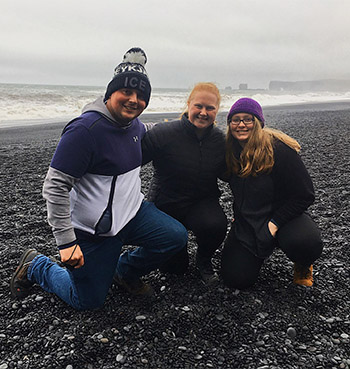 The Island Nation that Promotes Peace and Sustainability

Students will gain the perspective of a prospering island culture—an island nation that has no standing army and does not take sides with any country involved in conflict.  Students will learn that Iceland's notable political and social pursuits are also noble ones: a collaborative view of survival in a land of considerable volcanic activity and darkness for several months in a year; an equality in economic practices; an adaptability to change; and a national focus on preserving their cultural heritage.

Students will learn about new energy technologies from Iceland's abundant geothermal and hydropower sources. They will also be informed and inspired by two sites of historical significance to Americans and to the world: 1) the city hall, Hofoi House, where the summit meeting between Ronald Reagan and Mikhail Gorbachev was held in 1986, establishing a new workable relationship between the "Cold War" super powers, and 2) a visit by ferry to the famous Imagine Peace Tower, the memorial to John Lennon by his widow, Yoko Ono.