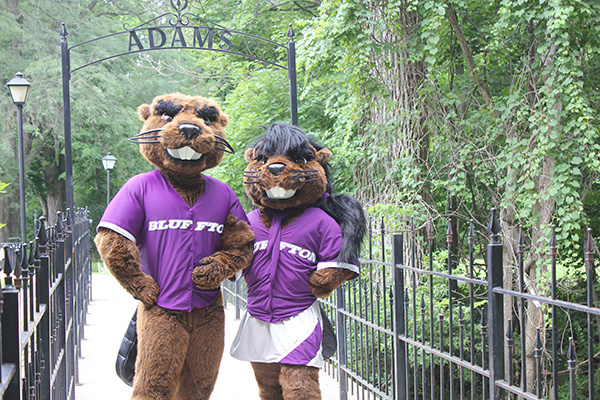 A match made in Riley Creek

BLUFFTON, Ohio—In the tradition of relationships born on the banks of Riley Creek, there’s a new couple on the Bluffton University campus.

After four years of flying solo at numerous athletic and other events, Bluffton mascot J. Denny Beaver has found a partner in Jenny Beaver, who is making her campus debut this week.

The eventual addition of a female mascot had actually been envisioned when J. Denny was introduced in fall 2010, said Robin Bowlus, the university’s public relations director. His costume had been made to fit student performers in a certain height range, which excluded interested and qualified students—often female—who weren’t tall enough, she explained.

In addition, the number of students vying for the mascot’s role has increased. This year, 12 new hopefuls auditioned for an opportunity to join a returning J. Denny for the 2014-15 academic year. That marked the most ever, “so there’s great student interest in the mascot program,” Bowlus said, adding that 11 students have filled the role over the last four years.

The program uses multiple students in the costumes in an effort to keep identities secret. They learn characteristics that will be common to everyone serving as mascot—such as a walk—and their identities aren’t revealed until an annual ceremony at the end of basketball season.

Planning for Jenny began in earnest shortly before Bluffton’s holiday break last December. On Valentine’s Day, J. Denny lamented that “Everybody’s Got Somebody But Me”—set to the Hunter Hayes song of the same name—in the first of a series of student-produced, YouTube videos. But at academic year’s end, he found a love letter in his mailbox in a follow-up video set to the 1981 hit “867-5309/Jenny.”

“Summer Nights,” from “Grease,” is the soundtrack for the most recent YouTube clip, which captures how J. Denny and Jenny met and built their relationship on campus this summer. That video was released Aug. 24, 2014.

Like J. Denny’s suit, Jenny Beaver’s costume was created by Street Characters Inc., a Canadian company that has designed mascots for more than 100 colleges and universities and about 30 teams combined in the National Football League, National Hockey League and Major League Baseball.

The costumes are at least the third in Bluffton history; the first is believed to be a papier-mâché head and furry body made and donned by students in 1967. But the beaver mascot goes back 40 years before that, to 1926-27. According to Bluffton’s centennial history, “Dancing with the Kobzar,” longtime coach and athletic director A.C. Burcky suggested then that the beaver was the ideal representative of Bluffton’s spirit because of five important characteristics—it was small, resourceful and indefatigable (tireless); it “works with twigs, building up large things from small,” thereby accomplishing more with less; and it “never does things any worse than its ancestors did,” thus working to make the world a better place.