Community for the common good

Moving from pastor to professor, Matt Friesen believes that a strong and supportive community lies at the heart of the Anabaptist tradition.

Attending Bethel College for his undergraduate education and continuing his religious studies at Associated (now Anabaptist) Mennonite Biblical Seminary, the new assistant professor of sociology cut his teeth on teachings of peace and nonviolence.

But Matt realized the importance of community long before setting foot on campus. Before earning his master of divinity degree in 1993, he interned for nine months as a community organizer with the United Neighborhood Organization of Southeast Chicago, where he helped organize neighbors to tear down abandoned houses.

The empty residences often became hubs for gang activity, says Matt, a pastor for 14 years in Kansas and Oregon before going to graduate school at the University of Oregon. The neighboring houses were also at high risk if one of the abandoned homes caught fire, which could potentially ignite the entire neighborhood.

“It was a very unglamorous kind of work,” he recalls. “It was very get-your-hands-dirty.”

Before the potentially hazardous homes could be demolished, Matt had to mobilize members of the community to testify to the Chicago city government that the abandoned houses were run-down, unsafe and harmful to the neighborhood.

“We would have all of these members give testimony about how terrible these houses were,” he says. “We got dozens of houses torn down in neighborhoods that were really in pretty bad shape.”

Once the houses were torn down, the city would often auction the land for as cheap as a dollar. Members of the community would purchase the plots and build things like gardens and playgrounds to benefit the neighborhood.

“Organizing the community was the way to address problems in that community,” Matt says. “It was truly a case of neighbors getting together, and neighbors accomplishing something together.

“That was a real eye-opener for me. Helping organize communities, you really can get things done.”

But most importantly, it builds community, he adds. “Neighbors who had previously not known each other suddenly do know each other. The whole effort becomes a process to build relationships in the neighborhood, and pretty soon the whole place becomes safer.”

Although new to the Bluffton neighborhood, Matt already sees potential for the community to work together for the common good. “The idea of things like community gardens or a campus garden, I think that’s a neat idea,” he says. “I think that would be an opportunity for community and students to keep working together.” 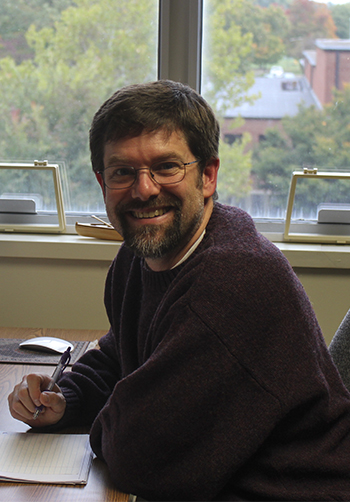 “That was a real eye-opener for me. Helping organize communities, you really can get things done.”