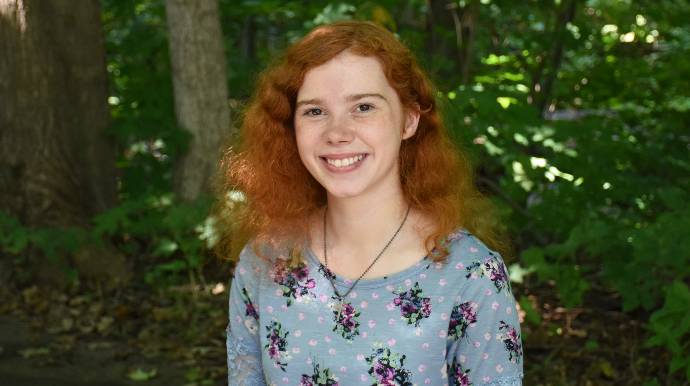 Senior immerses herself in campus/community life

Designs created by a member of the class of 2019 are now being seen by prospective members of Bluffton’s class of 2023. Emily Griffioen, a senior graphic design major from Belmond, Iowa, spent the summer as a student worker in Bluffton University’s public relations office. Recruiting materials including postcards, brochures, emails and posters she designed are currently being sent to high school seniors across the country.

“I got a feel for what doing graphic design full time is like which was really beneficial,” said Griffioen. “It’s nice to get the experience before I graduate. I learned a lot and it’s a little extra verification that this is what I want to do when I graduate.”

Griffioen, who also works at The Food Store in downtown Bluffton, is continuing to work for the PR office in her senior year on top of being involved in many campus activities.

“Busy is my normal,” explained Griffioen.

She plays flute in concert band and pep band and is a member of International Connection, Peace Club, Sustainability Club, Brave Spaces, Anime Club and Gaming Club. She also volunteers with SERVE and fills in as a keyboardist and reader in Chapel.

Griffioen came to Bluffton after two years at Hesston College and says it was a smooth transition. “All of my classes transferred and I just jumped right in,” said Griffioen. “I found friends quickly, and it was easy to get involved. I just found my place.”

Griffioen is combining her love of both subjects through an undergraduate thesis program within the art department.

“I’m making a website using grid design but the content will be about universal design or accessible design,” said Griffioen, who was inspired to learn more about accessibility issues after taking a class on the portrayal of disability in the Bible.

“I have a Bible and theology minor. That doesn’t really relate to graphic design but with the thesis program, I’ve taken the things I’ve learned in religion classes and combined them to not just communicate ideas but to offer solutions. That’s what my website will be about,” Griffioen explained.

Because she’s so busy, Griffioen schedules time each week to specifically work on her thesis. She can be found working on it and other homework at the Twisted Whisk, a downtown coffee shop.

“I really like the village. I’m used to small towns. Back home we don’t have a coffee shop or anything so it’s nice to have places to go with friends or a place to go to do homework,” said Griffioen.

And while she’s immersed herself in campus and village life at Bluffton, Griffioen says there are a few things about Ohio that she’s still getting used to.

“Ohio has too many trees,” joked Griffioen. “I’m from Iowa. We don’t have trees. We have corn. There’s not enough corn.”

Begin with a strong foundation in design elements and a focus on conceptual problem solving; use the latest tools and software and prepare for vocation with internship opportunities.