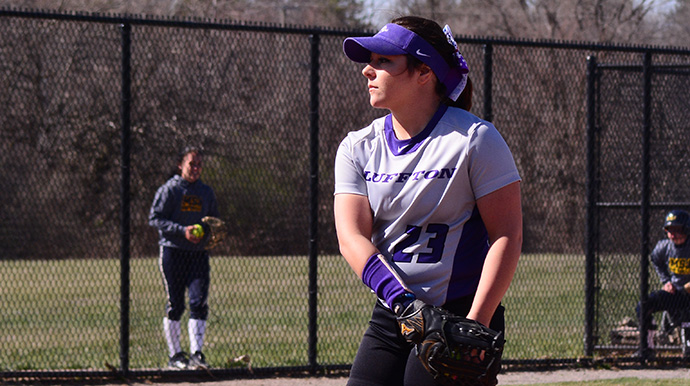 Support from professors allow student-athletes to excel both in class and on the field.

“I’m fluent in sign language. I learned from her,” said Montemarano, who is from Cleveland. “I used to go to speech class with her in elementary school. I didn’t have to take speech personally but you could bring a friend when you were little. That’s how I first experienced speech.”

Now, Montemarano is working with preschool aged children who are in group therapy sessions at Reaching New Heights, an innovative pediatric speech language and occupational therapy private practice in Broadview Heights, Ohio. The volunteer opportunity will enhance Montemarano’s application to graduate school and will contribute to the clinical hours she will need to become licensed in the field. The experience is giving her insight into how different types of therapists work together for the betterment of a child.

“Speech and occupational therapy work really closely together,” said Montemarano. “I’ve seen firsthand working there that it’s good to get speech and OT together because you can learn from the occupational therapist what you need to do with the kids that also have speech problems and you can give OTs ideas for how to help them the other way around.”

The children Montemarano works with have a wide range of abilities and disorders—from apraxia of speech to letter omissions and substitutions to behavioral issues.

During her sophomore year, Montemarano got a different type of hands on experience through laboratory sessions at St. Rita’s Medical Center led by Bluffton’s speech-language pathology and audiology program director Christina Bender.

“That was definitely a different feel,” said Montemarano. “There are so many different ways you can go into speech and that was a hospital setting so it was cool to learn that way.”

As a student-athlete, Montemarano said support from professors like Bender allow her to both excel in class and on the field.

“At Bluffton, the professors have been very flexible. I don’t think I would have found that at many other places,” said Montemarano.

Montemarano is also involved in Bluffton’s chapter of the National Student Speech Language Hearing Association. The student organization holds events on campus and brings in speakers to share about their career paths. Upon graduation, Montemarano plans to attend a graduate school in Ohio to fulfill her dream of becoming a speech-language pathologist.

Speech language pathologists work with people of all ages who have disorders in speech, language, social communication, cognitive communication and swallowing.