Adam Knott, a sport management major and 4-year defender on Bluffton’s soccer team, describes himself as a “sportsy” type of person. “I’m not much for sitting behind a desk and crunching numbers,” explained the senior from Lima, Ohio.

With zip lining, swimming and rock climbing on the daily schedule, Knott found the perfect summer job/internship at Pleasant Hill Outdoor Camp in Perrysville, Ohio. Knott served this summer as a camp counselor with several other college-aged students, including some from Bluffton.

The experience was much different than the laid back days he remembered of camp from his childhood. “It was a lot more stressful than I had pictured,” said Knott. However, it also helped prepare him for a future goal. With a minor in coaching, Knott’s dream job is leading a college soccer team. “Being with kids and teenagers all day helped me realize the stress of the job.”

At Pleasant Hill, he worked with kids ranging in age from 8 to 16, and the experience revealed the rewarding aspects of working with young people as well.

“The best part was probably getting to know the campers and watch them make friends and come out of their shells and have a blast,” said Knott.

Knott found the opportunity through a Bluffton connection. 2017 graduate Sam Sewell is the camp’s program director, and several other Bluffton alumni and students, including Greg Koviak ’19 and Lily Yoder ’21 also worked at the camp this summer, which is located halfway between Cleveland and Columbus.

“Being with them for those weeks I got to hang out with them and got closer to them and become friends with people who I knew were around campus but didn’t actually talk to a whole lot,” said Knott. “Even if someone was having a bad day, the atmosphere at camp felt like a really close family. I had never really experienced that before in my previous jobs. It was great to have that support group around you.”

As he enters his final year of college, Knott wants to continue to strengthen the relationships he has formed with his classmates. “I hope to continue to make friends on my way out,” said Knott.

And while he initially chose Bluffton because it was close to home, “I stayed because of the small campus feel,” said Knott. “All of the professors care about you. You’re not just a number at a giant school.”

Those professors include Dr. Perry Bush, professor of history, who taught Knott’s section of Christian Values in a Global Community. He described the class, which is part of Bluffton’s general education program, as his favorite at Bluffton.

“I just thought it was really great to talk about real world issues,” said Knott. “It opened up our eyes to problems around the world and not just to our own personal problems we have in our individual fields of study.” 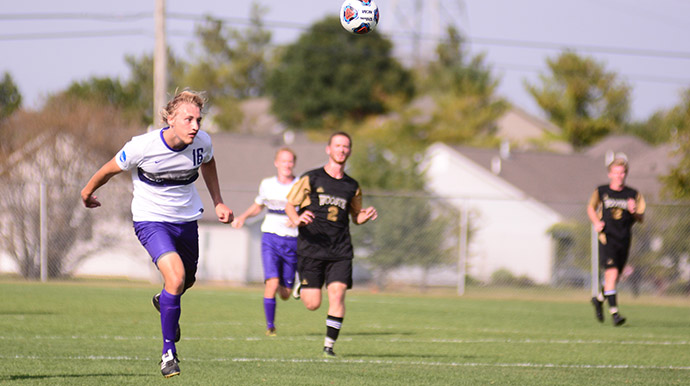 “The best part was probably getting to know the campers and watch them make friends, come out of their shells and have a blast.”