Claire Clay is a big fan of political dramas on television and on the big screen, but the junior public relations major from Van Wert, Ohio, got to experience the drama, political intrigue and scandals in real life this fall during a semester in Washington, D.C.

Well, sort of. “On TV everything is so high paced and serious, and it was at some points,” said Clay.  “But honestly, it wasn’t as cut throat as I imagined it to be. It was interesting to get a different perspective of D.C. and to get a behind-the-scenes view of what actually goes on in the city.”

Clay spent the semester as an intern in Congressman Jim Jordan’s office (R-Ohio).

As a communications intern, Clay worked directly with Jordan’s press secretary. “I got behind-the-scenes access to all of the radio and TV interviews he did. I helped work on his social media. I wrote press releases,” said Clay. “It was very hands on and I got a lot of professional experience.”

“It was a learning experience, but most of what I wrote toward the end of my internship was published,” said Clay. “It was really cool to see that I did something from start to finish that was publish-worthy for a congressman in such high standing.”

With the election taking place in November, Clay lived and worked in D.C. during a divisive time in politics. But the timing had its advantages.

“It was very beneficial to be there during a very conflict-heavy election because it gave me experience to learn how to handle conflict communication from the press secretary,” said Clay. “And one day Mike Pence was going to be in the building so the security was swarming and there were reporters everywhere. It was cool to be there and to see that.”

In addition to the internship, Clay participated in the Washington Community Scholars Center. The WCSC is a program run by Eastern Mennonite University, but it is also open to Bluffton University students. Participants live in a house with up to 14 other WCSC students in the working-class neighborhood of Brookland in Washington, D.C. They share meals, split household responsibilities and take a weekly seminar class together. Clay was the only Bluffton student during the fall 2016 semester.

“It was intimidating to not know anybody, and with my parents all the way back in Van Wert, it was time to really grow up,” said Clay. “Luckily, I had a really good roommate from EMU who got me involved with the others, and I made friends throughout the semester through my photography, which is a hobby, and I came back with two really close new friends.”

Clay visited the nation’s capital three times while growing up, but living there was a completely different experience.

“I went to Georgetown and Anacostia and it was cool to learn from people who had lived there all of their lives, and to hear what they had to say about the city,” said Clay, whose favorite destination became the Georgetown neighborhood. “It’s just a different atmosphere. I loved Georgetown Cupcakes—that was my favorite snack in D.C., but it was also a really good place to take pictures. There’s just an old style with brick roads and colonial-type buildings.”

While Clay enjoyed living the big-city life for a semester, small-town Ohio is where her heart lies. “Being close to family and friends is important to me.” And she’s not sure politics is in her future either. “I’m kind of burnt out on politics, maybe it was because of the time I went, which was a really good time to go because I got to experience a lot of stuff, but I think I’m going to take a break.”

Clay says the experience changed her academically, spiritually and professionally. “I think I came back a better person. The biggest area I grew in was being more open minded. Living with people with differing viewpoints was kind of challenging at first, but it opened my eyes to what others in the world see, and I either formed new opinions or affirmed the ones I already had,” said Clay.

Including Clay, 29 Bluffton students have participated in the WCSC program since Bluffton began sending students in fall 2009. Four students from Bluffton will participate during the spring 2017 semester. 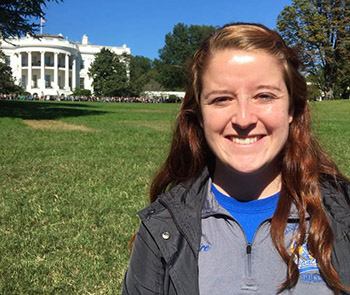 “It was very beneficial to be there during a very conflict-heavy election because it gave me experience to learn how to handle conflict communication from the press secretary. ”