How are business executives chosen? What process do they use to make decisions? Should leaders seek out ideas and input from their employees? Every person has a different answer to these questions, but viewpoints on leadership are often shaped by the cultural practices of the community in which a person lives.

Dr. Karen Klassen Harder, professor of business, explored these questions during a presentation titled “Images of Leadership” to about 30 business department faculty members at Banaras Hindu University in Varanasi, India, earlier this semester.

“For me it was a very good moment to stop and think about what really do we think about leadership and its local context, and what is that context for organizations that straddle geography,” said Harder.

The presentation was part of a sister-cities-exploration event organized by Dr. Suman Mishr and Dr. Shama Amin, two medical doctors in Lima, Ohio, with family ties to the major Hindu city on the banks of the Ganges River. Dr. James Harder, president of Bluffton University, the mayor of Lima, the superintendent of Apollo Career Center and the president and first lady of Ohio Northern University in Ada, Ohio, were also members of the delegation.

“It was a whirlwind visit and a wonderful opportunity to see another part of the world and to collaborate with people from the Northwest Ohio region. We represented a range of organizations and interests,” said Professor Harder.

The presentation was one of several exchanges during the visit. Professor Harder explained that the differences between a more western perception of power, where the focus is often on servant leadership, and the more authoritarian view of power held by those in attendance, were recognized immediately.

“We do make assumptions that there are differences, but the question is: if you have scholars educated in North America who come from India, China or Japan what happens to their leadership perspective?” asked Harder.

“Do they embrace the western perspective of leadership, or do they hold true to their assumptions from their own cultural context? I posed that question to the folks at the seminar. One professor immediately said absolutely in India there is a hierarchical view of leadership and in his experience the idea of empowerment and servant leadership is just not present,” said Harder.

Presenting in India provided new insight from different perspectives as well. “One of the questions somebody asked was whether I thought effective leaders were happy,” said Harder. “The question of happiness and leadership is one I have never heard addressed in North America. In North America, we talk about satisfaction, we talk about meaningful work, but we don’t use the word happy. That is something I left thinking about.”

In addition to the presentation, the group toured other educational settings, government offices and cultural landmarks, while also making the initial contacts to start more formal partnerships in the future.

“This is all still in the very early stages, but we made connections and, we certainly did the initial reaching out to high school representatives to warrant further conversation about developing partnerships to bring students to Bluffton,” said Harder. 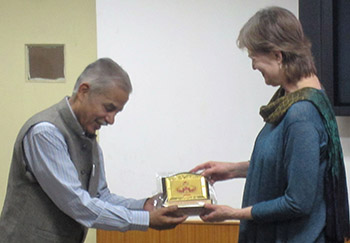