“I’ve been looking for a way to get involved” on the national level, said Talavinia, whose three-year term begins Jan. 17. “It’s good for me, the institution and for the Heartland Conference.”

With his four fellow committee members, he will hear appeals of infractions—from financial to recruiting-related violations—charged against Division III schools nationwide.

But the panel may not meet in person unless a major infraction is under consideration, Talavinia said. Conference calls, or possibly videoconferencing, are the more likely means of communication among the far-flung members, he pointed out.

He might even start seeing some appeals this month, he noted, explaining that with committee turnover in January, it would make sense for new appeals to start coming to incoming members now.

Talavinia had previously been nominated, but not selected, for membership on national committees. “I’d say, ‘Oh well, it’s not my turn’ and move on,” he said. But that kind of important service demands people who want to be involved, he added, and now that he has the opportunity, he wants to make the most of it, not only for himself, but also for Bluffton and the conference he is representing. “I’m certainly going to try,” he said.

Phill was reappointed to a second three-year term in January 2018. 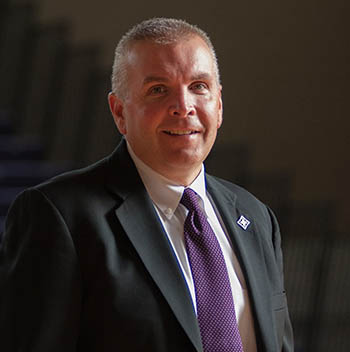 “I've been looking for a way to get involved. It's good for me, the institution and for the Heartland Conference.”