Some students have an idea of what they want to do after they graduate. Others are on a four-year search for answers. But Eric Beachy, a food and nutrition major from Millersburg, Ohio, has a 15-year plan, and it’s ambitious.

“In 15 years, I envision being the largest producer of hydroponic salads and probably have a system of salad-dispensing machines like we have with Coke and Pepsi. That’s where I see myself headed. It’s a 15-year goal, and I know I’m not going to get there overnight, but we need a system where healthy food is readily available to people.”

The 27-year-old, non-traditional student is from the conservative Beachy Amish Mennonite community. Very few of his peers have gone away to college. However, the opportunity to learn more about food and business brought him to Bluffton. So, he currently has a foot in two worlds.

“This degree is an investment in myself, but it is also an investment in the future of my community. I want to see more young people from my community getting their degrees. The reason many don’t is because of a cultural reluctance against higher education, primarily because higher education has been a way for young people of my faith culture to step away from their community.”

On campus, Beachy is involved in Camerata Singers and University Chorale, but he goes home each weekend to remain connected to his community. Before coming to Bluffton, he participated in an Amish Mennonite Aid voluntary service term in Paraguay. He also attended Faith Builders, a teacher-training school in Guys Mills, Pa., and taught at a private Christian school for one year.

While faith and culture are strong parts of his roots, food is as well. “On my mom’s side, out of eight siblings, five are involved in the food business.” That includes a chocolatier, a wholesale and retail food business owner, two bulk food store owners and his parent’s honey-packing firm. Tonn’s Honey. “Come Christmas get-togethers, we always had chocolates, we always had cheese and we always had meat. So yeah, I’m a bit of a food snob.” 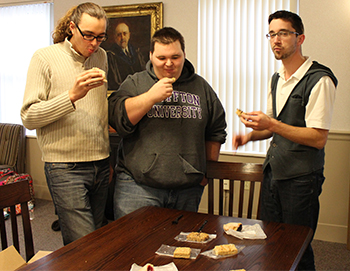 Beachy has brought some of his culture, through food, to the Bluffton area. During the week, Beachy lives with a conservative Mennonite family, who run their own food business about a half-hour drive from campus. To make some extra money, Beachy started a partnership with them to make and sell a traditional favorite from his region—fry pies. A fry pie is a dessert which is similar to a hand-held pie or turnover. However, his current project is making and selling granola bars. Beachy has four varieties.

“My flavors are chocolate chip, salted caramel pretzel, what I call peanut butter squared and dark chocolate espressed, which has dark chocolate and espresso added to it,” said Beachy. “Every time I think I have a favorite, I think of an idea for another one.”

He’s constantly creating new flavors in his head like a cherry and coconut combination, but he’s also interested in adding different ingredients such as quinoa or making them gluten free.  Beachy sold the bars at the Bluffton Farmer’s Market, and he’s working on getting them in area coffee shops.

“I’m always looking for ways to make them better.” Beachy is a people person and can probably talk about his plans and passion for food and business for hours, but he is also able to sum it up in just a few words.

“I just think I have an entrepreneurial spirit.” 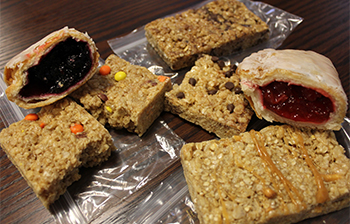