Their reasons for going differed, but Bluffton students who traveled to New York City this month for the Mennonite Central Committee (MCC) United Nations Seminar shared a learning experience.

The program’s focus was the Israeli-Palestinian conflict, of which the students got a different view than they often might.

“What stuck out to me was how dire a situation the Palestinian people in the Gaza Strip and the West Bank are in to just get the basics to survive,” said Stacey Freed. The sophomore from Elida, Ohio, who participated in MCC UN to learn more about the conflict, said a Palestinian ambassador’s talk about the conditions, and his perspective, were particularly valuable.

Having the opportunity to hear that perspective was “amazing,” added Olivia DePalma, a junior from Lima, Ohio, who noted that Americans usually hear the Israeli side of the story. “We were able to hear all of the issues coming from the mouth of someone who had to live them,” she said.

Katey Ebaugh, a sophomore from Holtwood, Pa., wanted to attend because of her interest in promoting peace. She said she can do that by refusing to buy products that help Israel to acquire more weapons, and—with her fellow travelers—by sharing the knowledge they gathered at events such as Civic Engagement Day. The best part of the trip, she added, “was being in a room full of people with the same passion to influence the world and strive for peace.”

Along with peers from other Mennonite institutions, the Bluffton students heard from speakers who have worked in the Holy Land and connected with others who are there now.

“We were able to Skype with groups in the Gaza Strip and talk about their work and their partnership with MCC,” explained Rebecca Juliana. The senior from Mechanicsburg, Pa., is considering both global social work and volunteering for MCC, and hoped MCC UN would be enlightening. “It was amazing to hear them … insist that they were not interested in money, food or other humanitarian aid, but rather all they wanted from us was to listen.”

“Recognizing that there is right and wrong on both sides is very important, and I was thankful for the opportunity to hear multiple perspectives.”

Ebaugh agreed, saying she felt “so blessed to be a part of Bluffton and be able to go on adventures such as this one. Learning in a classroom is beneficial, but nothing beats experience.”

Kayla Craig, a senior from Tallmadge, Ohio, was also part of the Bluffton group, which was accompanied by Stanley Scott, an adjunct instructor of political science. 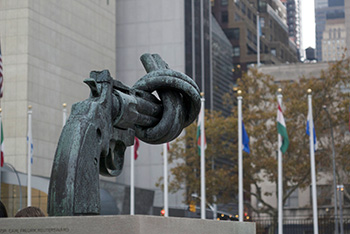 “Recognizing that there is right and wrong on both sides is very important, and I was thankful for the opportunity to hear multiple perspectives.”