Coaching success, on and off the court

Steve Yarnell didn’t always want to be a volleyball coach, but 10 years into his tenure at Bluffton, it’s working out pretty well.

Coach Yarnell just led his team into its second consecutive NCAA Regional appearance and third in the last six years. Each of those NCAA bids was secured with a Heartland Collegiate Athletic Conference tournament championship.

After losing five key players from last year, Steve had 14 players on the 2014 roster—the smallest one he has had at Bluffton. The team’s continued success has been a testament, he says, to good players who are committed to the sport. “I tell them where to go and, from there, they execute.”

Having a player-oriented coaching method fosters growth, he believes—but coaching methods weren’t originally part of the plan for the Miller City, Ohio, native.

He and a friend saw signs for a new men’s volleyball team and decided to try out. “We were like the ‘Bad News Bears,’” he says, describing a “rag-tag” group of athletes from various backgrounds.

But the team got better, and Steve became good enough to play for a team representing the United States in the Australia Down Under Games. He won a gold medal not only in volleyball but also in basketball, replacing a player who became ill.

As a sophomore at Findlay, he had decided to major in athletic training. Coaching a youth club volleyball team, however, he found he enjoyed the job. He soon switched his major to physical education and health and served as a student coach for Findlay’s women’s volleyball team. That stoked his interest in college athletics, which eventually brought him to Bluffton.

He considers Bluffton a prime location, not far from either his wife’s or his family, and with a “good family atmosphere,” he says. Coaching the volleyball team here has given him the opportunity to run his own program, where he enjoys seeing students grow and mature. He especially likes holding a camp or clinic for a volleyball team coached by one of his former players. “It means I didn’t burn them out on the sport,” explains Steve, who also holds a master’s degree from Findlay, in education, and teaches in Bluffton’s health, fitness and sport science department.

Though he misses playing the game, he enjoys seeing the players he has coached succeed at every step of life. “Going to former players’ weddings, seeing them start a family and keeping in touch with them is special,” he says. 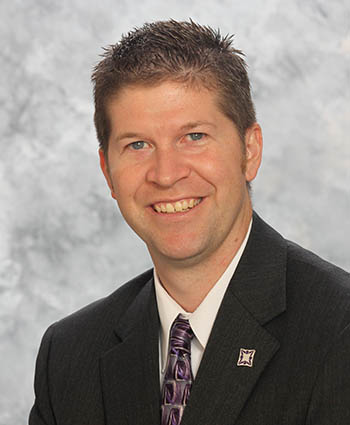 Steve played for a men's volleyball team representing the United States in the Australia Down Under Games. He won a gold medal not only in volleyball but also in basketball, replacing a player who became ill.