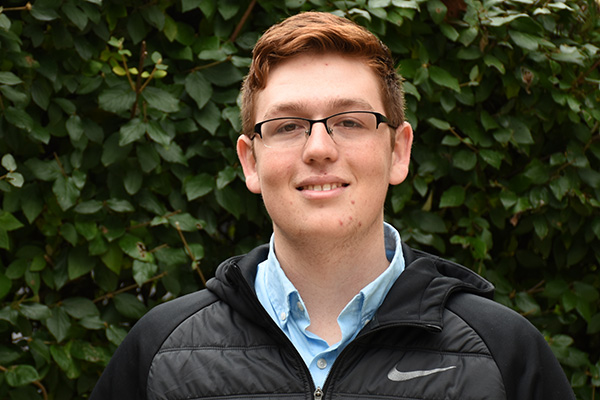 After studying abroad in Guatemala for a semester, Jarod Siekman returned to Bluffton University with a new understanding of numbers that crossed cultures and opened up ideas about mathematical concepts.

A math education major, Siekman completed an extensive research project on Mayan mathematics and, at the urging of Dr. Steve Harnish, professor of mathematics, recently presented his research at the 46th Annual Mathematics Conference at Miami University.

“The ancient Mayans had a very sophisticated and developed mathematical system that they used basically at the same time Roman numerals were being used in Europe,” said Siekman, a junior from Delaware, Ohio. “It was a lot more advanced for the time.”

At the conference, Siekman shared in detail the “base system” that the Mayan’s used. “It is very different from the math we use,” he said. “They use a base 20 system instead of a base 10. We go up in values of 10 places, so ones, tens, hundreds and so on; but they use base 20 so they had ones, twenties, four hundreds continuing up in powers of 20 rather than 10.”

Each student who took part in the 2017 Guatemala semester abroad chose a topic to study in depth. Siekman, wanting to utilize his major area of study, looked at how the Mayan numerical system differed from our own and how they utilized it in their calendars and for astrological purposes.

“The Mayans had three primary calendars,” explained Siekman. “One was for the solar year, one was for sacred or religious years that they would perform religious ceremonies on and the other was the long-count calendar.”

Each calendar also had a different number of days, he continued. “They calculated how many days a solar year was down to 365.25, which is very close to what we have today. They were using this math at the same time that Europeans still thought the earth was flat. The Mayans really had a lot of advances.”

While learning these things abroad, Siekman also connected the cultural significance that the math and calendars played in the lives of the Mayan civilization. “They would reference all their major dates. For example, whenever they would finish building a temple, they would mark in the temple the date on their long-count calendar when they’d finished.”

“It was interesting to see how they used calendars not just for days of the year but also for their culture and different ceremonies or significant days,” he said.

For Siekman, math has been something that has always come naturally. Wanting to teach, he “heard from other students that Bluffton had a really good education program.” Adding up the opportunities, Bluffton seemed like the right place to call home.

Although his cross-cultural studies are over and his initial research has come to a close, Siekman hopes to utilize the ideas and techniques he developed through the Mayan math project in his lesson plans.

“I think there’s a lot of cool math ideas that you can teach students even if it doesn’t really apply to the curriculum,” explained Siekman, “Even if it’s just to get them more excited and interested in math rather than just solving equations.”

Wanting to teach, Jarod “heard from other students that Bluffton has a really good education program.” Adding up the opportunities, Bluffton seemed like the right place to call home.