Adam Craig, Bluffton’s newly-hired golf coach, took an unconventional path to the green. Like one of golf’s greats, he didn’t pick up the sport until he was a teenager.

“I like to say that I started at the same age Jack Nicklaus did. He started at 14. I didn’t turn out quite as good as him,” joked Craig.

He only tried golf because his aunt bought him lessons for a birthday gift. However, Craig has made a successful career out of the sport and was hired as Bluffton University’s head men’s and women’s coach in August.

Craig was a student-athlete at the University of Findlay from 2003-2008. He redshirted his freshman year and had an impressive four years of play.

“I was a member of the only GLIAC (Great Lakes Intercollegiate Athletic Conference) championship-winning golf team at Findlay, said Craig. “I played in every tournament in college which was exciting and fun.”

From there, Craig became a golf professional at the Findlay Country Club. While there, he passed the tests to become a member of the Professional Golfers Association (PGA). However, earning this recognition was bittersweet for Craig. While in Florida for the examinations, Craig found out his father had unexpectedly passed away. He immediately flew back home to help with funeral arrangements.

While his parents never took an interest in playing the sport themselves, they were instrumental to his early success.

“Once my dad saw my interest, my parents both got a second job at a driving range. I had unlimited practice at the range which allowed me to grow and become who I am today and where I am today,” said Craig. “My sister is in the golf business as well, but my mom and dad never played golf. They knew nothing about golf, but to support us, they worked at a golf range selling golf balls.”

Understanding of Craig’s unexpected situation, the PGA allowed him to return to Florida a few months after the funeral to give a final 15-minute presentation to complete the association’s requirements.

Now, a dad himself, Craig is sharing his love of the sport with his two-year-old son, Luke.

“I haven’t taught him whole lot about golf yet, but he’s kind of picked it up from watching the guys on TV. He has a golf club, and he likes to imitate them,” said Craig. “I had him on the driving range once, but he liked the golf cart a lot more than the actual sport itself. If we could remove the golf cart, I’m sure he would be out there hitting balls.”

However, until his son’s attention span increases, Craig is focusing on college-age competitors. He is currently recruiting high school boys and girls for the 2017-18 season.

Craig already has college-level coaching experience. For the last three years, he was the assistant director of golf at the University of Findlay. In each of those years, the women’s team competed at the NCAA DII National Championship.

“I always say to the recruits that they are student-athletes not athlete-students,” said Craig. “I’m here to prepare them for life because very few student-athletes go on to play golf as a career, but golf is something they can play for a lifetime, and they can use it for business or recreation.”

As part of the recruiting process, Craig has been on the road much of this fall, going to tournaments and meeting prospective students. He also became a high school rules official and was selected to be on the rules-officiating crew for the state tournament where he will be able to watch and support the next generation of college golfers.

Golf is quite popular in Northwest Ohio, but Craig understands golf isn’t a sport for everybody. “You have to be a pretty patient person. It takes a lot of concentration and focus. Student-athletes have to put in a lot of work and dedication,” said Craig.

However, the key is finding out what drives a golfer.

“It means something different for everyone. I was an art major in college, and I’m the perfectionist type, and golf is something that you are never going to perfect. So, it’s an ongoing challenge for me.” 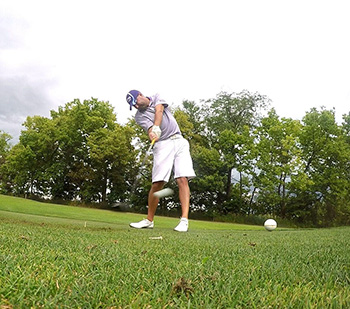 “I always say to the recruits that they are student-athletes not athlete-students I’m here to prepare them for life because very few student-athletes go on to play golf as a career, but golf is something they can play for a lifetime."

Adam Craig coaches both the men's and women's golf teams.