With a bald head and graying beard, John Parent ’18 doesn’t look like a traditional student at first glance, and his resume looks just as different. The senior English major with a concentration on adolescent/young adult education from Delphos, Ohio, is not only a full-time student at Bluffton but also a husband, a father of seven, a full-time regional sports editor and currently the active mayor of Delphos.

“I wanted to make sure that my kids and their friends were going to grow up in a safe environment,” said Parent on his mayoral appointment after the former mayor stepped down due to health reasons. “And I thought if I can help, then I should help; so that’s why I decided to get involved,” said Parent.

With no initial intentions to become mayor, Parent submitted his resume to network for future city council opportunities in Delphos once he had graduated. “I sent in my resume with the thought I would go in, talk to city officials and get my name out there,” said Parent. “Apparently the interview went better than expected.”

As the position is temporary, Parent will hold office until the end of December, but he is currently on the ballot for election in November to complete the term that runs until 2019. “My hopes are to continue. It’s been a really interesting process so far,” he said.

Along with his newest position in city government, Parent also works as the sports editor for the “Van Wert Times Bulletin” and the “Delphos Herald” in the evenings and participates as a full-time student at Bluffton during the day. He has worked in journalism for 10 years.

Parent returned to school with the desire to complete his degree in education and get more time with his family. Bluffton was not only close to home, but it also held family legacy. Parent’s grandfather, Herman Parent, graduated from Bluffton in 1950 and was the initial investor in the Lion and Lamb Peace Arts Center, a donation made in memory of Parent’s grandmother Helen (Brenneman) Parent.

The transition back to college later in life has been rewarding. “The whole process from the start to where I am now – a year away from graduation – has been better than I expected,” said Parent.

“English,” Parent’s concentration, “lends itself to discussion and lends itself to shaping the way students appreciate other points of view and perspectives.” Parent sees his role as an educator to help students grow not only academically but also personally. As he looks to student teaching in the spring, he hopes to bring that discussion and life building to his classroom.

At present, Parent is looking forward to the election in the fall, graduation in the spring and the ability to spend more time with family in the years to come. 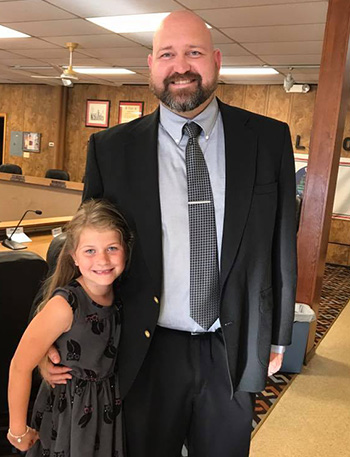 John and his daughter, Amity

“I wanted to make sure that my kids and their friends were going to grow up in a safe environment. And I thought if I can help, then I should help; so that’s why I decided to get involved.”