During the summer of 2016, Blake Hershberger ’18, an international peace, justice and conflict studies major from Canton, Ohio, immersed himself in the Guatemalan culture. Hershberger lived in Guatemala City for one month with the aid of a $1,500 Summer Discovery Grant awarded by Bluffton University to students who are interested in exploring the intersection of vocation and faith.

“The nice thing about the Summer Discovery Grant is that it doesn’t put you in a box. There is a variety of ways you can use the grant,” said Hershberger. “It’s there for you to continue your learning and continue to discover your vocation during the summer.”

Hershberger definitely doesn’t like to be put in a box. Along with an academic advisor, he developed his own major at Bluffton and he has been accepted into an alternate semester abroad program. In the future, Hershberger wants to do humanitarian and peace work through Mennonite Central Committee (MCC) or Christian Peacemaker Teams (CPT).

He was first introduced to these organizations by his parents who raised him to be conscious of social justice in everyday life. “Growing up in a Mennonite church also makes me very aware of MCC and their missions. Having people in my life that care about social and humanitarian issues, whether it is domestic or international, has made me aware of their existence.”

While in Guatemala, Hershberger lived with a host family and studied Spanish at Central America Study and Service (CASAS) through the Latin American Anabaptist Seminary (Semilla).

”I wanted to go to a place I’ve never been to so I could learn more about the culture. One, because that’s what I’m really interested in and two, because I think it will give me a better sense of where I would like to work,” he said.

On a typical day, Hershberger spent the morning in Spanish-language lessons at CASAS and then spent time with his host family. On the weekends, he visited with his host family’s extended family and traveled both inside and outside the city, including time spent at some Mayan ruins sites and climbing a volcano.

The most important aspect of the experience was overcoming the language barrier. “What I came to realize is that all of these important classes I’m taking at Bluffton are helpful in their own setting, but if I can’t speak the language fluently it’s harder to actually apply what I already know,” said Hershberger. “It’s much harder to communicate, connect, and work with people if I don’t have the extra knowledge of the language.”

Hershberger is already working on his next adventure. In the spring of 2017, Hershberger will spend a semester in Amman, Jordan, which he hopes will establish another global setting for him to consider for his career path.

“One of the things I really want to do is not only learn about multiple cultures but also go to as many countries and as many cultures in those countries as I can."

As Hershberger continues college and moves toward a vocation of international peace and justice, he considers Bluffton and his own Mennonite roots to play a key role in his understanding of global conflict. “I didn’t really think much about what pacifism and what that stuff meant until the end of my freshmen year in college. I started to think that maybe that could be a very valuable way of living and solving problems.” With a fresh perspective on global context and vocational directions, Hershberger looks to expand peace, justice and resolution on a global level. 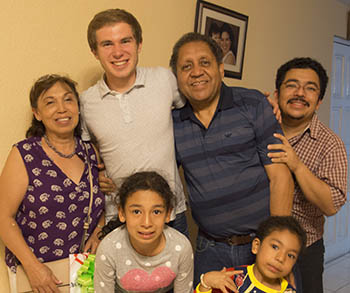 Blake with his Guatemalan family

“The nice thing about the Summer Discovery Grant is that it doesn’t put you in a box. There is a variety of ways you can use the grant. It’s there for you to continue your learning and continue to discover your vocation during the summer.”