Bluffton’s newest addition to the English faculty is spearheading a new initiative for the university. Jamie Lyn (Smith) Fletcher, assistant professor of English, will direct Bluffton’s new literary journal. Through the journal, her goal is to give the department and the university a broader reach.

“I really see this as an opportunity for Bluffton to position itself as a national leader in young (youth) writing,” said Fletcher.

The intent of the journal is to feature writers between the ages of 14 and 24 and reach a national audience.

“Diversity and inclusion are very important to me. I want to make sure that this is truly representative,” said Fletcher. “I think that treating and featuring young writers with the same gravitas that we give to more established and emerging writers is very important. I want to try to provide for some of our young writers an opportunity that I wish I had had when I was young that just did not exist.”

She encourages current Bluffton students to be a part of the development of the journal, whether through writing, editing or even the naming. “I really need a name for this thing,” joked Fletcher. “I think that there is a lot of work to be done in creating this journal that is really powerful and exciting.”

Fletcher had an interesting journey to Bluffton. She graduated from Kenyon College with a double major in theater and English, and from there, began freelancing in theater production.

She worked as a technical generalist in New York and San Diego, doing a variety of jobs from costume work to electrical engineering. After working in theater for a few years, she moved to New York full time and began her teaching career.

After earning a master’s degree from Fordham University, she moved back to Ohio and began working in outreach at New Directions Domestic Abuse Center in Knox County, in her hometown. It was “a job unlike anything I had ever done before,” she stated.

Soon after, Fletcher took a position at Columbia State College where she led a GED acquisition program. She was accepted into OSU’s MFA program and recalls she “was the only person in fiction workshop that had written only one story. That was it.” Before that, she used the skills gained from her English degree on new play development.

At Bluffton, she was immediately pleased by the values that that exist on campus. “I felt like with absolute certainty that I was going to the right place. [Bluffton is] a good place with good people who can agree and disagree civilly, which is very hard to find.”

As well as being encouraged by the campus community, Fletcher is also enthusiastic about her work as a professor. “I love teaching college because it is such a great time in human development. There’s so much experience already in life, and yet still so much experience to come. There’s a great deal of curiosity and energy.”

Considering her classes Fletcher says, “I hope that I can really craft my courses in a way that’s responsive to [students’] interests, while at the same time pushing them to invert and explore those interests.”

She encourages anyone interested in writing or the literary journal to pursue those interests. “You don’t have to be an English major to be a good writer. Some of the most interesting stories come from people who don’t have a traditional background of a major in English.” 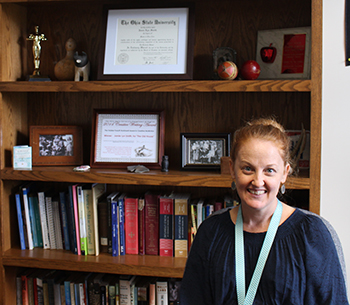 “I think that treating and featuring young writers with the same gravitas that we give to more established and emerging writers is very important. I want to try to provide for some of our young writers an opportunity that I wish I had had when I was young that just did not exist.”