The early Swiss Mennonite settlers in the Bluffton area arrived about 180 years ago, and they carried with them family-heirloom Bibles that were already 300 years old at the time.

That a handful of those “Zurich” Bibles still survive—also considering that their language translation was objectionable to Swiss authorities when they were printed in the 16th century—is remarkable, says Carrie Phillips, archives and special collections librarian at Musselman Library.

Carrie curated an exhibition of some of these, and other, “Pages of Piety” in connection with the August observance of the 175th anniversary of the building of the first Mennonite church in the Bluffton-Pandora area.

Zurich Bibles were so called because 16th-century reformers in the city adapted a translation of the Bible by Martin Luther—who used High German—to a style of German with which Swiss Mennonites were more comfortable, Carrie explains.

The Froschauer printing house published the first complete, single-volume edition of the Zurich Bible in 1531. The library’s Mennonite Historical Collections hold donated copies of the 1531 Bible, and of a rare hybrid edition that combines the first part of a 1536 edition—including Genesis through Esther, plus the Apocrypha books not included in most Bibles—with the second part of a 1539 revision—Job through the New Testament. A 2007 census of Froschauer Bibles indicated that only five copies of the hybrid version existed in North America.

The latter Bible “had its journey from the 16th century in Europe to use in this community,” Carrie says. Helping provide a bridge was a 1744 reprint by the state printer in Strasbourg, the capital of France’s Alsace region, where Swiss Mennonites had immigrated and interest grew in having a reproduction of an early Froschauer Bible.

“Evidence suggests that the 1536 second edition was quite popular for a number of reasons but was perhaps rare at that time among Anabaptists in that area,” she notes.

The library has 11 copies of the 1744 reprint Bible—the largest known collection of those Bibles in the world. The copy exhibited for the anniversary celebration in August was probably owned, Carrie says, by Christian Steiner, the first bishop of the Swiss Mennonite congregation whose descendants are now in four local Mennonite churches—Ebenezer, First Mennonite, Grace and St. John. Ebenezer hosted the anniversary exhibit, which also included hymnals and devotional books, some of which are still being published today.

Carrie has personal history with the 1744 Bible as well, having used it for a study in an archival class at the University of Washington, where she earned her master’s degree in library and information science in 2006. And some Amish and Hutterites still use it in their daily lives, she adds.

Once the early, non-state-approved Bibles escaped confiscation in Switzerland, then continued to endure, some also became significant for another reason. In addition to their already “unique history,” individual Bibles often became “a record of a family’s history,” with a sometimes lengthy list of births, baptisms and deaths, Carrie points out.

“They have survived a lot,” she says of some of the archives’ prized possessions, to remain a part of living history. 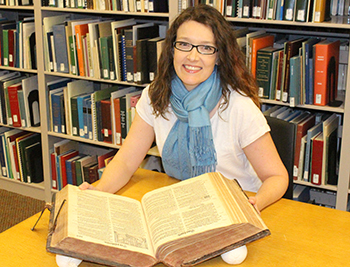 Carrie has personal history with the 1744 Bible as well, having used it for a study in an archival class at the University of Washington, where she earned her master’s degree in library and information science in 2006.