Hard work pays off at the County Fair

Morganne Faler’s chances of winning big at the Logan County Fair might have seemed grim earlier this summer. After 11 years of showing animals through 4-H, this was her final year of eligibility, she had never won the competition and her hog was named Grim Reaper. However, the gloomy-named Grim Reaper proved to be a lucky charm. The hog earned the top title of grand champion market barrow (a male hog raised for meat) in the junior fair competition.

Faler bought the hog in March and raised it through the summer. “The seller told us that when he was born, he had died, but they somehow brought him back to life,” said Faler. “That’s why they called him the Grim Reaper.”

Faler brought two hogs to the fair this year, Grim Reaper and Lola, as well as a t-bone steer named Buzz, who was awarded the reserve grand champion title.

“I was really excited because I’ve shown for a long time, and I’ve worked really hard,” said Faler. “Now, it feels like my hard work paid off.”

In her final year, showing really did pay off. Champions at auction can sell for big bucks. Faler’s hog sold for $1,100, while her steer went for $3,500. Faler, a sophomore early childhood education and intervention specialist double major from Huntsville, Ohio, will put the money toward college expenses.

This year’s checks, however, were out of the ordinary. “We don’t really make money,” said Faler. “We don’t get back the expense of buying them and feeding them because feed is really expensive.”

Faler doesn’t live on a big farm. In fact, when her family began raising animals to show at the fair, they had to convert a portion of their three-car garage into a stable. They built a barn a few years ago.

The family purchases the hogs to raise in March, and the steer in August. Then the training begins. “We walk them outside, we rinse them daily, we weigh them,” said Faler, who had help from her father and younger brother while she was away at Bluffton. Faler returned the favor for her brother this summer by taking care of his animals while he finished high school and took part in lengthy soccer practices.

Faler was a member of the Miami Valley Producers 4-H club. She says she will apply the lessons learned through 4-H at Bluffton and beyond.

“I learned a lot of valuable skills like leadership because I was the president of my club and held other offices in the club,” said Faler. “4-H also taught me how to interact with younger kids and the value of hard work and responsibility.” 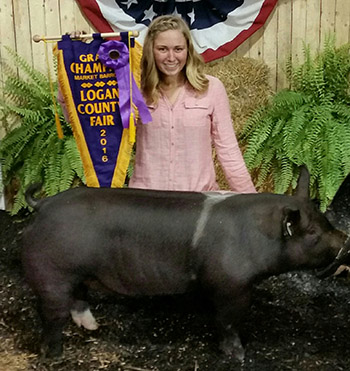 “I learned a lot of valuable skills like leadership because I was the president of my club and held other offices in the club. 4-H also taught me how to interact with younger kids and the value of hard work and responsibility."