While many Bluffton University students travel during their summer break, this summer, Dean Walters traveled, learned a new language and observed the treatment of diseases many people in the United States don’t even know exist. The pre-medicine and biology major from Avon, Ohio, spent six weeks in Peru completing an immersive Spanish and medicine internship.

“It was so interesting being able to see how different the health care system is down there,” said Walters. “In the U.S., we have these large, magnificent hospitals. In Peru, it’s a developing country and the public hospitals have nowhere near the kind of technology and advancements we have here in the United States.”

On a typical day, Walters spent half of his time in intense Spanish-language classes which emphasized the use of medical terminology. The other half of the day, Walters spent shadowing and volunteering at places including the Mother Teresa Clinic in Cusco, which serves children and the elderly with mental and physical disabilities, and a gastrointestinal unit at a hospital, where he watched a doctor perform a colonoscopy. Walters is working to become an emergency room doctor or surgeon, so his favorite location was the E.R.

“Their emergency rooms are obviously different, but the most interesting thing was just the variety of patients they had,” said Walters. “They had a lot of infectious disease patients with things we don’t see very much here in the United States like malaria and leishmaniasis—tropical diseases that you wouldn’t normally expect to see in an American hospital on a normal day. There were also a lot of patients with tuberculosis.” On top of watching the action, interns, including Walters were able to help by recording vitals and interacting with the patients.

Walters enjoyed the experience because he feels at home in a hospital.

“Ever since I was little, I’ve loved being in a hospital. My grandma was in the hospital a lot,” said Walters. “I just enjoy the whole atmosphere. Everywhere you go there’s people helping other people.”

Walters credits Bluffton’s science faculty for helping him through his sophomore year as a science major, a year which is notorious for its difficulty. “I like that the program is small,” said Walters. “Just being able to have a lot of one on one attention with the professors is such a huge help.”

Walters applied for the internship on a whim after Dr. Daniel Berger, professor of chemistry, sent an email. It’s a decision he doesn’t regret. He earned two semesters worth of Spanish credit and fulfilled his cross-cultural requirement. The opportunity also increased his desire to travel and to learn more about different cultures.

“After doing this internship, I would definitely think about doing more medical work in developing countries,” said Walters. 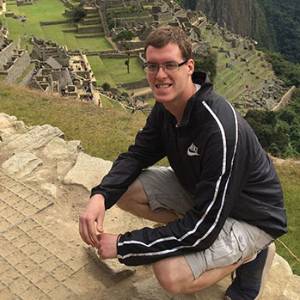 Dean applied for the internship on a whim after Dr. Daniel Berger, professor of chemistry, sent an email. It’s a decision he doesn’t regret. He earned two semesters worth of Spanish credit and fulfilled his cross-cultural requirement.