From clay to cups, 2015 Bluffton graduate Mary Bias has been creating ceramic pieces since the beginning of her senior year at Bluffton. Bias, who lives in Lima, says creating from clay is a way for her to talk to God.

“It’s solitude,” said Bias. “You start hearing things, and I heard God speaking to me and telling me that these cups are a blessing. A lot of people see a cup as half full or half empty, but God told me that I am creating a vessel for him to pour in to.”

Bias is taking ceramics as an independent study and set a goal to create 100 cups. She is currently at 119, with no sign of slowing down. When she signed up for her first ceramics class, Bias didn’t give it much thought.

“When I decided to do ceramics, I just thought I would go in there and paint some stuff on mugs and that would be it,” said Bias. “I didn’t realize that we had to make things and be on the wheel and stuff like that. I freaked out a little bit about that, but I overcame it and excelled pretty well, and it became my new love and passion.”

Bias has a degree in social work and would like to incorporate her love of ceramics into her work with youth.

“I can show these kids there’s a better way than to go out and get in to trouble,” said Bias. “Come in here and make something, and be proud of what you’re doing and learn and enjoy yourself. Hopefully that mindset will change them.”

Bias will continue to make cups and bowls through the summer, and she encourages others to pick up some clay.

“It is something that makes you feel good, and at the end you can say you made something,” Bias said. “For me, when I first walked in here, I was really intimidated. Now, I just want to help people move forward and not struggle so much in life.” 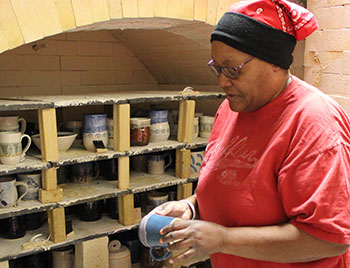 “When I first walked in here, I was really intimidated. Now, I just want to help people move forward and not struggle so much in life.”