Audra (Hammond) Oglesbee, access services coordinator at Musselman Library, may get a brain workout from handling thousands of books, but physical exercise can be hard to come by. That’s why she started a program to encourage herself and her colleagues to get up from their desks and get moving.

Audra, who is also the library’s circulation supervisor, chairs a wellness committee that offers three exercise courses on campus. Faculty and staff can pay a small fee to join one or all of the courses, which take place once a week over lunch or at the end of the workday. “This allows them to have some kind of exercise in the afternoon, especially for those who sit,” she says.

The three courses currently offered are yoga, Zumba and a “power half hour,” which incorporates calisthenics, balance and flexibility exercises and strength training. While she hopes to have all courses run year-round eventually, the only offering this summer is yoga, which she notes is especially beneficial for men to practice.

While Audra now considers herself healthy, she wasn’t always so health-conscious; she consumed her share of pop and processed junk food, she says. But she started taking her health seriously in 2003, when she was diagnosed with Crohn’s disease, an inflammatory bowel disease that causes gastrointestinal disorders, abdominal pain and even malnutrition.

Unfortunately, the medication designed to treat the disease caused its own problems for her. “The side effects of the medication were almost as bad as the pain,” she recalls.

She began researching nutrition and how her food choices agitated her disease rather than treating it. Soon enough, she dropped meat in favor of a plant-based diet because the cholesterol in meat promotes inflammation, she says.

She also decided to grow her own vegetables and fruits, which now comprise what she calls an “edible landscape” that occupies most of her refrigerator. She keeps chickens for eggs, which she says are high in vitamin D because her chickens are free to roam under the sun as they please, unlike most farm chickens.

Although she tries to break a sweat with vigorous exercise four times a week, her diet is her top priority. “You can’t out-exercise a bad diet,” she points out.

But that doesn’t mean you shouldn’t exercise regularly, Audra advises. Aside from taking one of the exercise courses on campus, she recommends starting small and slowly increasing the workout routine, whether it’s walking, lifting, yoga or something else. “You don’t have to push yourself,” she says. “You don’t have to be an athlete the first time you go out.”

When lifting, she suggests starting with machine equipment rather than free weights until you understand the equipment and your body. And, when walking, she adds, try taking the same route and going farther or faster each time to increase intensity and/or time walking.

And most importantly, exercise consistently and regularly, she says. “As far as exercise goes, the power of habit is important. Build that habit and mindset.”

Her other suggestions include researching the food you eat, basing meals around vegetables and grains rather than meat, eating whole grains in place of processed grains and varying your exercise routine from day to day to get a full-body workout.

Today, Audra treats her Crohn’s disease primarily through healthy living and dietary supplements, not medication. “Focus on what your body needs,” not what it wants or can’t have, she says. In addition, she recommends eating “the food that God made,” not food that is processed or unnaturally made.

Wellness is about living a high-quality life that endures old age and overcomes illness, she says. “I can’t change my DNA,” she notes, “but I can control my inflammation.” 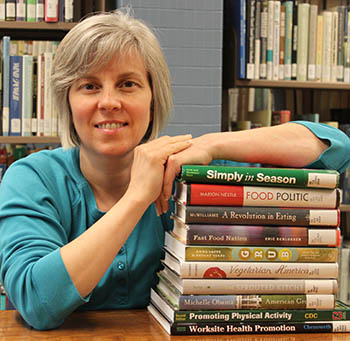 While Audra now considers herself healthy, she wasn’t always so health-conscious. She started taking her health seriously in 2003, when she was diagnosed with Crohn’s disease.