If you ever head to the weight room at Sommer Center, there’s a good chance you’ll run by Ollie Moorer either lifting weights, working on cardio or even clearing his mind with yoga. But don’t be intimidated if you hear him looking and sounding like the character Bane from Batman or Darth Vader, as it’s only his endurance mask.

“I usually walk around in it talking like Bane and they say it sounds really lifelike,” Moorer said. The mask helps Moorer push through his workouts and increases his lung capacity in the process. He’s even looking to get a new one, “They have a 3.0, and mine is the 2.0. So the 3.0 must sound scarier,” he joked.

Moorer is a sophomore strength and conditioning major from Warrensville Heights, Ohio.

“When I first got to Bluffton I worked out by myself most times,” Moorer said. However, when he met fellow fitness enthusiast/students Triston Mechling ’17 and Cameron Walker ’18. They quickly became loyal workout partners and are, “the only people out of all who can handle my workouts on a daily basis,” Moorer said.

Drawn to Bluffton by the family atmosphere of the campus and the football team, Moorer works hard in and out of season to keep in shape. “The family is all in football, right there. We’re a unit,” he said.

He draws inspiration from his many figures in the fitness world.

“I feel like fitness is a thing that helped me cope with my life, and it helps relieve stresses,” he said. “There’s always a positive to the fitness world, and I feel like it’s made me a better person.”

Moorer found his fitness motivation at an early age watching wrestling. “I started wanting to look like them so I started lifting,” he said. His father, a body builder at the time, was also a big figure in Moorer’s early years.

Other inspirational people such as Ray Lewis, Eric Thomas, Kali Muscle, Mike Rashid and CT Fletcher continue to drive Moorer to pursue his fitness goals to this day. During the Arnold Fitness Expo held in Columbus, Ohio, in early March, Moorer had the opportunity to meet a few of these fitness icons and develop connections with others passionate about health and well-being.

“As far as my first time experiencing it, I didn’t even know anybody when I went up there and all of the sudden I was making friends,” said Moorer regarding the Fitness Expo. While there, he participated in a pull-up challenge as well as the push-up challenge, creating friendships with fellow lifters and fitness enthusiasts along the way.

In the future, Moorer has big dreams to have a larger role in the Fitness Expo. “I want to do fitness– like a fitness base to where it’s motivational and a brand to where it’s clothing, nutrition and supplements,” he said.

“There’s always the aspect of am I good enough, as far as bodies” said Moorer. He’s found that it’s not a matter of being outwardly fit, but rather feeling healthy on the inside.

Moorer hopes that his hard work motivates others to begin leading healthier lifestyles. Even if that involves little steps in eating healthier meals or taking 20 minutes to do some yoga, Moorer encourages others to better their bodies. “I don’t feel I have to make people look muscular. I just want to have people feeling in shape, feeling good and feeling vibrant.” 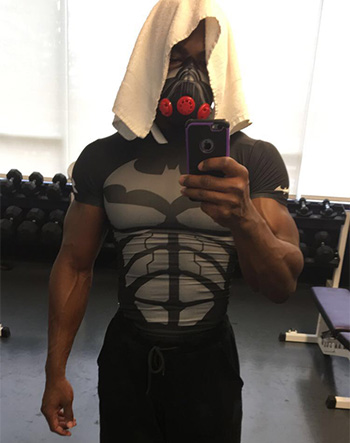 “I don’t feel I have to make people look muscular. I just want to have people feeling in shape, feeling good and feeling vibrant.”