A trip to the Dominican Republic with her high school volleyball team four years ago was life-changing for Lauren Dickerson.

Traveling to the Dominican capital of Santo Domingo following her freshman year at Goshen, Ind.’s, Fairfield High School, she and her teammates combined sports with service, visiting orphanages where children were waiting for sponsors.

“I saw a whole lot of kids nobody wanted, and I didn’t know why,” says Lauren, who came back to the U.S. with an interest in international adoption that’s ongoing. That interest manifested itself last fall in “After All,” a children’s book-like story that the first-year student wrote for her Becoming a Scholar class.

The story tells how Addie, a little zebra who realizes she has fewer stripes than other zebras, learns that being different “isn’t so bad after all.” She reaches that conclusion with the help of a new friend, a cheetah named Bailey who, with only two spots, doesn’t look like other cheetahs, either.

Although the other zebras don’t seem to notice that Addie looks different, and despite her mother’s reassuring “I love you” whenever Addie mentions it, it takes a friend who is also different to convince her “that she was perfect the way she was,” Lauren writes in a note at the end of the story.

“Even if (adoptive) parents do everything right, it may take someone just like their international child to show them that different is OK,” the social work major adds.

Lauren says she wanted to do something different for her Becoming a Scholar project, which was among research or creative work presented by eight faculty-nominated students during a Celebrate the Library Week program in Musselman Library in February.

Since then, several faculty members have told her that she should try to get her story published, and she has been referred to faculty who are familiar with that process, she says.

Influenced by parents who are educators, Lauren brought a love of writing and reading children’s books to the project. But before she could write the story—which she says is for adoptive parents to read to their international children, or for children to read themselves—research was required.

She interviewed several Bluffton faculty and community members who have adopted international children, and also looked into international adoption in the Philippines, Vietnam and Haiti. Short summaries of how those countries handle adoption serve as a preface to the story, which also includes illustrations by Clint Sprunger, Lauren’s high school classmate.

Among the takeaways from her research were that other children don’t readily see international peers as different, and that adoptive parents should make their international children aware of their native cultures. She attempts to make those points in her writing, including through Addie’s love of stories, “which was meant to encourage parents to tell their children stories of their own heritage, and be truthful about it,” Lauren notes in another postscript.

She adds, however, that parents she interviewed also wanted her to communicate that adoption isn’t always positive. “You are not saving the child from something; in many cases, it is best to keep the biological family together,” she says she learned. “Recognizing adoption as a good deed will only hint that the international child has a different place in your family, perhaps a lesser one, than your biological children.”

“I wanted to make it relevant to my major,” says Lauren about her project, which earned her a nomination for the library program by Dr. Ross Kauffman, assistant professor of public health and her Becoming a Scholar instructor.

“Lauren’s project was a great example of what the Becoming a Scholar project aims to accomplish: having students explore topics of personal interest and present their findings in a way that is meaningful to their intended audience,” Ross says. “A children’s book is an ideal format to reach the audience of families who are experiencing adoption, and Lauren’s project synthesized detailed research into her topic into a creative and engaging final product.

“A children’s book may not be the first thing to come to mind when people think of a research project, but Lauren’s work shows how one can apply scholarly research to learn about a topic and share that information in a useful way.”

Lauren would eventually like to meld her social work major with her interest in international adoption, possibly by working with Compassion International. Based in Colorado Springs, the Christian child sponsorship organization operates Dominican orphanages that she visited, and her family sponsors a Compassion child. 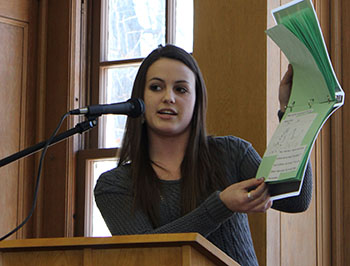 “Lauren’s project was a great example of what the Becoming a Scholar project aims to accomplish: having students explore topics of personal interest and present their findings in a way that is meaningful to their intended audience. A children’s book is an ideal format to reach the audience of families who are experiencing adoption.”