Looking at history through food

A new course this semester has had students spending part of their time learning about various cultures, and the other part cooking their cuisines. The course has explored both ancient and modern civilizations to learn why humans eat what they do, concluding that what’s on our plates really tells us who we are.

The class began with students—primarily history and food and nutrition majors—reading “Catching Fire: How Cooking Made Us Human” by Richard Wrangham. The Harvard University professor argues that our evolutionary success can be attributed to the domestication of fire more than a million years ago.

“Cooked food can be more easily digested, meaning we need smaller guts, and we need less energy to digest cooked food,” Martina says. This led, early on, to a surplus of calories for the brain, which caused it to grow at a significantly faster rate than in other mammals, she notes.

But evolutionary advancement has had its downside, too, she adds. “The issue that humans have is that we’re the only species that needs fuel to prepare food, meaning that it is in our nature to exploit our environment. So cooking and the destruction of the environment go hand-in-hand.”

“What are we constantly running out of as humans? Things to make fire with: wood, coal, fossil fuels. We are completely dependent on them, and it’s a huge trade-off.”

Before diving into individual cultures, the 18-member class examined the Neolithic Revolution and the transition from hunting and gathering to agriculture that took place roughly 10,000 years ago. At that point, Martina explains, humans began seeing their food as not just a necessity for life, but also as a way to practice religion and establish social order.

“Cuisine is so much more” than food, she says. “It’s a religious process; it’s a spiritual process.”

One of the first cuisines the class studied was the Jewish diet. “There is no such thing as Jewish food,” she asserts. “Jews who lived in Europe ate like Europeans, and Jews who lived in Persia ate like Persians.”

“What’s different is how they eat, what significance the food has for them,” she adds. To demonstrate this, the class cooked European-based foods such as latkes (potato pancakes), which are traditionally eaten during Hanukkah, and borscht, a beetroot soup typically consumed during Passover.

History major Amanda Bartel, a junior in the class, says it offers historical insight into the world that’s often overlooked. “In many of our other classes, we look at huge events like wars and revolutions, but not very often do we look closely at something as common as food,” she points out.

While Martina hopes that the students develop a deep appreciation for food, Jeanna seeks to prepare the food and nutrition students for a career in dietetics. “They’re going to be able to have better assessment abilities” when they work with clients or populations from other religions or ethnicities, she says.

For instance, a client’s diet may prove hard to change based on religious dietary restrictions. “This isn’t a simple thing,” Jeanna notes. “The beliefs are historical and have been ingrained for a long time.”

Kati O’Neill, a sophomore food and nutrition major, feels the class is helping her develop more appreciation for the food on her plate. “It makes me have an open mind about what other countries eat,” she says. As an aspiring nutritionist, she also believes that what she’s learning will come in handy “if I ever have people who aren’t American and want something specific put into their dietary plan.”

Bartel thinks the course will leave a lasting impression. “I hope to take away a new understanding of cultures, one based in food and the way that cultures interact with it,” she says.

And O’Neill feels it will not only aid her in her future career, but is also changing her personal tastes. “Some of the new foods that I have never had that we make in the lab and enjoy are something I want to make at home,” she says. 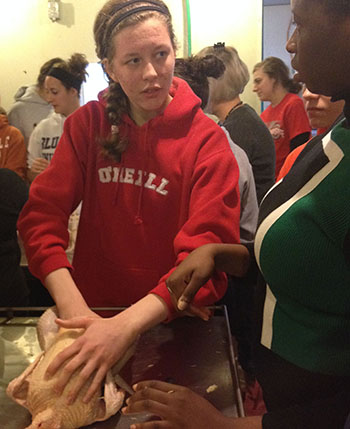 This course has evolved into a three-credit-hour history course, HIS 345: Food - A History, taught by Dr. Cucchiara.