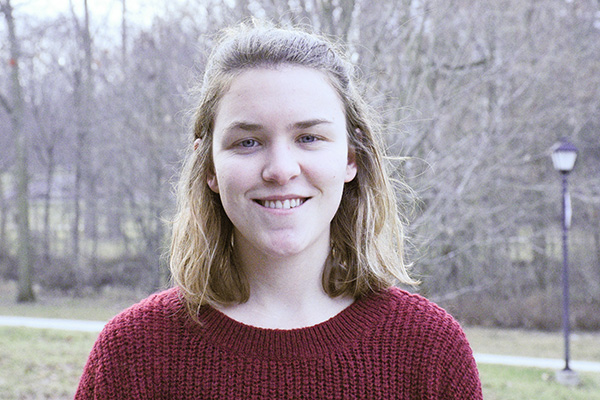 Lydia Lugibihl, a senior food and nutrition major with a concentration in business, utilized her minors in marketing and business administration to enhance her experience at Bluffton University.

The Pandora, Ohio, native spent the spring 2019 semester in Washington, D.C., at the Washington Community Scholars’ Center (WCSC), and this fall she joined the student leadership team of the Bluffton Bread Company.

WCSC gives students the opportunity to live and learn with peers from other universities while taking classes administered by Eastern Mennonite University faculty. Participants also complete a 20-hour-per-week internship in a field of their interest or major.

Lugibihl’s internship was at the Capital Area Food Bank (CAFB).

“Getting to spend a semester in a totally different environment while getting school credit and great internship experience was absolutely incredible” said Lugibihl. “Not to be dramatic, but it was the best decision I’ve ever made.”

CAFB operates direct distribution programs where they take the food directly from the warehouse to various D.C. communities. Originally, Lugibihl was going to assist two program coordinators with their duties, but after a week they asked if she could take over as a program coordinator for the Joyful Food Markets program while they found someone to fill the position full time.

Joyful Food Markets are farmers-market style distributions at schools all around D.C. done in partnership with the organization Martha's Table.

“In this new position, I would hold weekly meetings with Martha's Table where they would tell me what they hoped to have at the markets each month. Based on that, I would create menus for all of the upcoming markets, order produce and secure dry goods from our warehouse,” explained Lugibihl.

After a summer of relaxation, Lugibihl was ready for her next adventure, which came from Jeanna Haggard, assistant professor of food and nutrition.

“My favorite part of the experience has been selling the bread, most memorably at the Harvest Dinner,” said Lugibihl. “This was our first real sale, and I think it went better than any of us were expecting. We sold out, and seeing how the Bluffton community reacted to the bread and the company in general was really cool.”

This experience has also helped Lugibihl venture outside her comfort zone.

“With such small classes and a small campus in general, I have always felt more pressure to talk in class and participate in general which can be super difficult for me,” explained Lugibihl. “But, over the past few years I have grown to appreciate Bluffton’s small size. I've been pushed out of my comfort zone, and I think it's made me a better student and a more confident person.”

“I think I've always known I would go to Bluffton—ever since I was very young,” said Lugibihl. “I grew up Mennonite, and I think going to Bluffton has reaffirmed my appreciation for those values.”