Bluffton student is also a novelist

At just 22 years old, sophomore Brista Drake is working on her second book. The art and writing major from Richwood, Ohio, self-published her first work, a young adult novel called “Remedy for Memory” in 2015 after three years of dedicated work. Drake is also a YouTube vlogger under the name WritingMime and is involved in theatre productions on campus. Her writing focuses on coming-of-age fiction and topics surrounding personal growth.

“I really enjoy just exploring how people grow into something new,” she said. “At any age really, I think that’s just something really important to cover.”

Drake’s love of writing grew after high school. “I realized that I wanted to turn my story into a book,” she said. With writing, Drake felt she could express herself more fully. “In writing I could at least have it all said and covered on paper,” especially in situations where it was difficult to talk with others.

Fantasy, another genre Drake enjoys, is something she has been focusing on at present. “It is just going into a new realm because we all need to escape sometimes,” she said.

Drake is in the process of writing several new pieces, but her latest story, a fantasy children’s book, is one she hopes to complete in the coming academic year at Bluffton. “I’m going to be doing an independent study, so I’m going to be working on that book while working on a black and white storyboard for the first draft of an animated movie,” she said.

After starting her college career elsewhere, Drake found Bluffton. She was greeted by an atmosphere that felt more like home. “At Bluffton, the teachers are great; they know you personally. You get to know a lot of people.”

Drake has many big dreams and creative aspirations. She wants to continue writing and to develop her You Tube presence as well as “I would also like to be the director of at least one movie, although that could take many years of my life,” she said.

She encourages other emerging writers and artists to pursue what they love in any way that is available and effective for them. 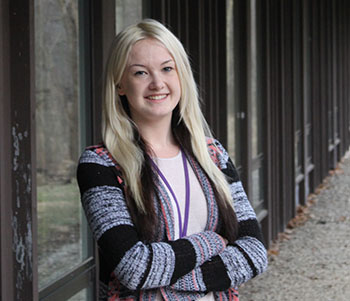