In January, the group assisted the Special Olympians with their annual ramp and unified bowling tournaments at Westgate Lanes in Lima. SAAC members helped the athletes when needed, such as helping set up the lanes and assisting them with rolling the ball during a night of spirited competition and laughter.

And April 11 in Indianapolis, SAAC representatives and Special Olympians will team to compete for Bluffton at the Heartland Collegiate Athletic Conference (HCAC) unified bowling event, which will award winners for the first time in its five-year history.

“When you’re helping those kids and they have a smile on their faces, you just get this great satisfaction knowing that they’re out there doing something that they love to do, and you get to help them do it,” said John Beavers, a first-year student and SAAC member.

“They make you have a good time because they’re having a good time,” the exercise science major said.

In January, Beavers assisted an athlete with cerebral palsy, who, although she could not talk, was having a blast, he said. “Just seeing how happy she was every time I’d roll her up to the lane so she could push the ball down, it was just fun.” So much fun, in fact, that the girl’s mother invited him to visit their home sometime.

In February, SAAC also helped host a Special Olympics basketball tournament at the Sommer Center. The winners, from Hancock County and Allen County, advanced to the state-level tournament in early March.

When not serving Special Olympics or other organizations, SAAC’s primary goal is to represent athletes both at Bluffton and throughout the HCAC.

Last fall, for example, the committee opposed a proposal to the NCAA that would cut 10 percent of the allowed number of games in Division III sports. “It costs games, it costs competitions, it costs practices,” said Aron Gibson, student president of SAAC at Bluffton and also of the conference-wide committee. “And it just takes away from the spirit of the game,” he added, noting that the legislation has failed for now.

SAAC is eager to continue its partnership with Special Olympics, he said, pointing out the “big tie-in” between the two organizations on the national, NCAA Division III level.

“Special Olympics is close to me because I have a few friends at home who compete in Special Olympics,” said Gibson, a junior who has a double major in exercise science and strength and conditioning. “They’ve told me the joy they get out of somebody coming and helping them, or being there just to support them. And that’s one big thing we (SAAC) want.” 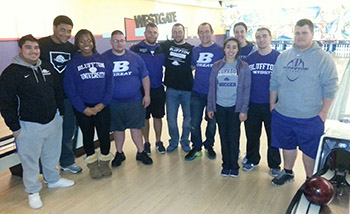