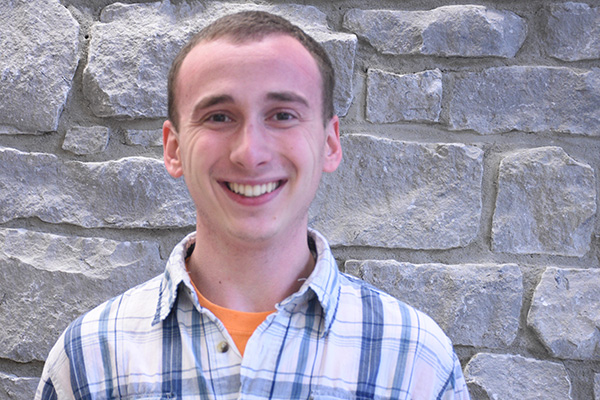 For Michael Short ’20, coming to Bluffton University gave him the opportunity to delve into his beliefs and his faith. Born and raised in the Mennonite church, Short said coming to Bluffton was the first time he’d been exposed to beliefs significantly different than his.

“Coming to Bluffton has helped me solidify my faith,” Short said. “It’s presented me with a whole array of views in the church, so that’s really challenged me and helped solidify my beliefs and helped me question why I believe what I do.”

One specific experience Short believes has helped his faith journey is the opportunity to serve as a ministry assistant and later a pastoral assistant. Short joined the pastoral team in the spring semester of his first year at Bluffton. He had the opportunity to lead Bible studies every week. Now in a leadership role, he makes sure everyone has the resources they need to do their ministry.

“I’ve grown a lot through working with the ministry team,” Short said. “I’ve changed a lot along the way, as well. It’s not like I came in saying, ‘This is what I believe,’ and I’m leaving that way.”

Short has also appreciated how the faculty are always willing to sit down and have a conversation about their faith. He meets once a month with Lamar Nisly, vice president and dean of academic affairs, as part of a mentorship through the ministry team.

“We talk about different books that we read together, about what stuck out or anything that challenged our faith or made us question,” Short said. “We also get to know each other as people outside of Bluffton. Getting to know him outside of his academic role is really special.”

Short, a senior who is finishing in three years, is an information technology major with a business administration minor. He chose to come to Bluffton because he wanted to be more than just a number, which he feels is one strength of his major.

“Another thing I’ve really appreciated about the major is they bring in a lot of adjuncts, many of whom are business owners,” Short said. “They bring not only the technical know-how and can teach the material, but they can also provide a practical, real world experience.”

Short said the number one thing he’ll take away from his time here is the common Bluffton saying, “It’s all about relationships.”

“Taking the time to get to know people has been something I’ll take with me,” Short said. “Wherever I end up next, I’m not just going to go in and do the job. That’s just one aspect that’ll make me successful, but also going in and investing in the people, getting to know the culture and then applying myself is just as important, which is something Bluffton has really instilled in me.”