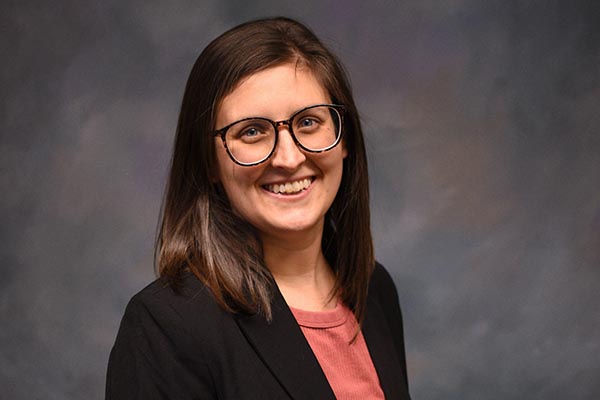 A 2012 graduate, Chalsi (Eastman) Campbell came to Bluffton University as a religion major with a focus on youth ministry. Now, she’s back at Bluffton as the campus pastor with the goal of being a faith support to the student body.

“It’s nice to be back because I have all these memories of all these places,” said Campbell. “It makes you nostalgic, and it’s great to see the campus is even better.”

Originally from Norwalk, Ohio, Campbell started her career teaching theology at Lima Central Catholic High School. After a few years, she moved to Canada, earned her master’s degree in theological studies at Conrad Grebel University College in Ontario and returned to Ohio to teach at the Dayton Islamic School.

“I think my experiences at the different schools helped me get this job,” said Campbell. “I have a more ecumenical view of what faith looks like.”

Growing up in a diverse home of faith, Campbell shared that her youth pastor helped her develop a relationship with God through some dark times during her teenage years.

“Sometimes we get angry and that is okay,” said Campbell. “We have to channel that anger to build our relationship with God. After you overcome it, your relationship becomes stronger.”

As a student, Campbell instantly felt at home on campus and continued to grow in her faith as she became involved in campus ministries. She worked as a Spiritual Life Week coordinator and in the religion department. Starting her sophomore year, she even helped create Bluffton’s prayer labyrinth which was finished during her senior year.

“This feels very much like a homecoming,” said Campbell. “I’m glad to be back where I had some of the best years of my life.”

Now, Campbell is excited to shake up a few aspects of campus life, including Chapel.

“We are starting a new Chapel format this week, and we’re going to try it out for the next several weeks,” said Campbell. “The Chapel format has been the same since I was a student, which is fine, but sometimes change is good.”

The changes, which include incorporating reflection questions, are designed to encourage increased participation at the Thursday services. She’s also excited to for the ministry team to grow community through a refocused attention on serving students in the residence halls and helping first-year students. In the fall, Campbell will also start teaching classes in the religion department.

Outside of campus, Campbell lives in Findlay with her husband, Tyler Campbell ’11, a Ph.D. candidate in theology at the University of Dayton. They have two children, Keziah, 3, and Cy, 1.5.

“We also have a big white dog named Harlow, and our daughter recently got goldfish named Bob and Tammy,” said Campbell. “They are important members of our family!”

When the weather is clear, they enjoy spending time outdoors, particularly at playgrounds. Campbell is also a big fan of “Big Brother” and reality television.